Gold declined for a third day after bond yields climbed ahead of a key Federal Reserve meeting where policy makers are set to raise interest rates.

Bullion has eased after rallying to within $5 of a record last week as Russia’s invasion of Ukraine and accelerating inflation boosted demand for the haven asset. The war has led to sustained inflows into bullion-backed exchange-traded funds, driving total holdings to the highest level in a year, according to initial data compiled by Bloomberg.

Months of speculation about a new wave of interest-rate hikes look to be coming to a head on Wednesday, when the US central bank is expected to begin tightening to rein in decades-high inflation, which is being exacerbated by surging commodity prices.

Markets now indicate they expect about seven quarter-point Fed rate hikes in 2022. The 10-year Treasury yield extended gains after rising to its highest level since July 2019 on Monday, which reduced the appeal of non-interest-bearing gold. 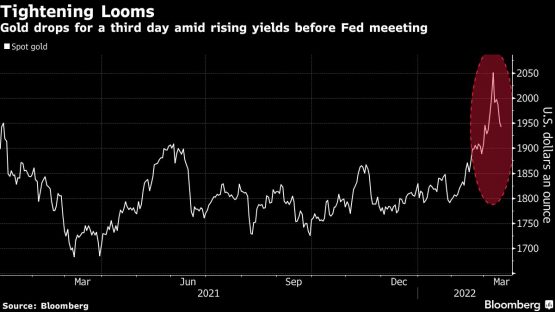 “Price action will depend on Fed commentary in the short-term, but I wouldn’t be surprised to see gold rally on the day of the Fed hike, as long as the commentary isn’t too hawkish,” said John Feeney, business development manager at Sydney-based bullion dealer Guardian Gold Australia. “Any shifts in the current situation in Ukraine will likely outweigh the focus on the Fed, and inflation is tipped to remain elevated for some time which could keep a floor in gold and silver prices.”

Palladium fluctuated between gains and losses after dropping 15% Monday, the most since March 2020, as supply concerns eased. Vladimir Potanin, the biggest shareholder in key producer MMC Norilsk Nickel PJSC, said the company is maintaining exports despite the suspension of air links with Europe and the US by re-routing shipments.

Separately, the European Union is set to approve banning the sale to Russia of luxury goods above a certain value as well as the purchase of many steel and iron products from the country as part of a fourth round of sanctions over the invasion of Ukraine, according to a draft obtained by Bloomberg. Palladium — which is mostly used in catalytic converters in gasoline engines — is exempt from the restrictions.