Gold headed for the biggest quarterly advance since 2016 amid a surge in demand for haven assets due to the coronavirus outbreak, which shows no signs of abating.

Bullion has been rising due to a resurgence in virus infections, with new hot spots emerging and the World Health Organisation warning that the worst of the pandemic is still to come because of a lack of global solidarity. More US areas took steps to scale back reopenings, while Australia’s Victoria is imposing a four-week lockdown in some parts of the metropolis of Melbourne in an attempt to contain a spike in cases. 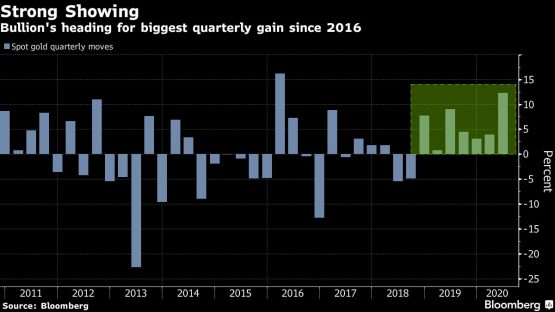 The precious metal has rallied 17% this year as the health crisis prompted a wave of stimulus from governments and central banks as they tried to minimise the damage to the global economy. Investors also continue to pile into gold-backed exchange-traded funds, with holdings at a record.

“Low interest rates, monetary policies and the coronavirus are all at play,” said Howie Lee, an economist at Oversea-Chinese Banking Corp. in Singapore. “The $1,800 level is a psychological hurdle. At current prices we see gold pushing the boundaries of what our model implies as fair value, so we may need a larger collapse in Treasury rates to push gold past the $1,800 level.”

The $1,800 mark “is not far away so it can happen quickly,” said Commerzbank AG analyst Carsten Fritsch. “But further beyond will be more difficult.”

Investors will be closely watching comments from Federal Reserve Chair Jerome Powell due later Tuesday. In remarks prepared for testimony before the House Financial Services Committee, Powell stressed the importance of keeping the coronavirus contagion contained as the US economy bounces back from its deepest contraction in decades.