Gold fell after the Federal Reserve left its benchmark interest rate unchanged and stuck with the current pace of bond-buying, aiding the dollar and putting bullion on course for the worst start to a year in a decade.

The Fed repeated it would maintain bond-buying at $120 billion per month until “substantial further progress” toward employment and inflation goals has been made. After the Federal Open Market Committee’s first meeting of 2021, Chair Jerome Powell said it would take “some time” to achieve the threshold for altering purchases, making clear the central bank’s not close to tapering them. 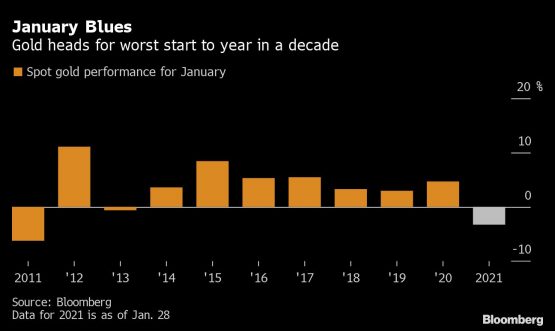 Bullion has lost more than 3% this month, its worst January performance since 2011, as traders weighed the strengthening greenback, prospects for more stimulus, and trajectory of the pandemic. Powell said that the widespread availability of vaccines was grounds for optimism, noting that “several developments point to an improved outlook for later this year.”

“Investors focused on the Fed’s optimistic tones on vaccinations, which suggest a strong recovery in the second half,” said Edward Moya, senior market analyst at Oanda Corp. “Gold can’t get its groove back until the dollar rebound is over. Gold’s consolidation phase continues, and the bull case should remain if prices can hold the $1 800 level over the next couple of weeks.”