In other precious metals, silver and platinum were higher while palladium was little changed.
By Ranjeetha Pakiam, Bloomberg 8 Jul 2020  13:06 Gold’s allure is only getting stronger as 2020 unfolds. Spot prices reached $1,800 an ounce and year-to-date inflows into bullion-backed exchange-traded funds have topped the record full-year total set in 2009.

Investors have favored havens this year as the coronavirus pandemic rips through economies, spurring sustained inflows into gold-backed ETFs as central banks and governments unleash vast stimulus programs. States across the US recorded new highs in cases and deaths on Tuesday, and Federal Reserve Bank of Atlanta President Raphael Bostic said the resurgence of the virus may be threatening the pace of America’s recovery. 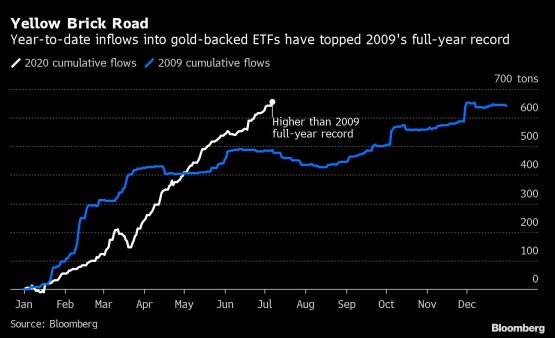 “A massive investor response to Covid-19 has pushed ETF holdings to record levels, the impact of which has outweighed the decline in jewelry demand and absorbed increases in recycling,” said James Steel, chief precious metals analyst at HSBC Securities (USA) Inc. Further inflows are expected “as investors respond to elevated risks and low yields,” he said in a note.

Holdings in gold-backed ETFs rose to 3,234.6 tons on Tuesday, according to initial data compiled by Bloomberg. That’s up 655.6 tons so far in 2020, topping the rise in tonnage terms seen in 2009. The total has risen each month this year.

Bullion prices and holdings are widely expected to extend gains, with Goldman Sachs Group Inc. saying the metal could reach a record $2,000 in the next 12 months and JPMorgan Chase & Co. recommending investors stick with bullion.

“Short-term price risks remain skewed to the upside as long as the virus does not come under control,” said Carsten Menke, head of Next Generation Research at Julius Baer Group Ltd.

More Fed support may be on the way. Vice Chairman Richard Clarida said that policy makers would likely turn to additional forward guidance and asset purchases if the economy needs more aid. “There is more that we can do,” he told CNN International.“The near unprecedented fiscal and monetary peacetime response to Covid-19 supplies gold with two substantial bullish inputs: liquidity and debt,” HSBC’s Steel said. “Low interest rates, monetary accommodation including balance-sheet expansion and heavy fiscal spending globally for the foreseeable future will cement and extend gold’s rally.”