The debate over what to do about inflation in recent days saw Jeff Bezos, the world’s second-richest man, in a Twitter spat with the Biden administration.
By Molly Smith and Erik Wasson, Bloomberg 19 May 2022  12:16 Many Democrats blame price-gouging companies for the worst surge in Americans’ cost of living in more than a generation. But several left-leaning economists disagree.

Desperate to avoid a wipeout in November congressional elections, House Democrats are preparing to vote Thursday on a bill they present as a centerpiece of their response to record high gas prices. It would confer power to bar the sale of consumer fuels at “unconscionably excessive” prices.

It’s part of a broader narrative that President Joe Biden and his party has championed that a swath of companies — from energy firms to meat packers — is taking advantage of pandemic-related disruptions to jack up prices all the more in an effort to boost profits. But most economists, including many aligned with Democrats, counter that there’s little evidence such practices are behind the inflation crisis.

“Corporate power is playing likely a very small role in the inflation that we’re seeing right now,” said Jason Furman, a Harvard professor who led President Barack Obama’s Council of Economic Advisers. “The primary solution has to come from the primary cause of inflation, which is demand is way too high.”

The debate over what to do about inflation in recent days saw Jeff Bezos, the world’s second-richest man, in a Twitter spat with the Biden administration. The Amazon.com Inc. founder charged Biden with “misdirection” in saying that prices could be held down by boosting corporate taxes.

The newly created Disinformation Board should review this tweet, or maybe they need to form a new Non Sequitur Board instead. Raising corp taxes is fine to discuss. Taming inflation is critical to discuss. Mushing them together is just misdirection. https://t.co/ye4XiNNc2v

Treasury Secretary Janet Yellen earlier this month reflected the view of most economists, saying, “inflation is a matter of demand and supply.” She has also acknowledged that the March 2021 relief bill did add to demand — while proving worth its while in sparking booming job gains and limiting risks of a deeper downturn. Many congressional Democrats have, by contrast, focused on the role of companies.

“Price gouging needs to be stopped,” House Speaker Nancy Pelosi said May 12 after announcing plans for a vote the gas-price bill. “This is a major exploitation of the consumer.” 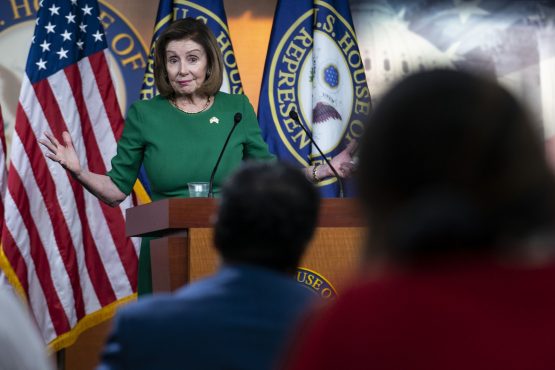 Senator Elizabeth Warren, the Massachusetts liberal, and fellow Democratic Senator Sheldon Whitehouse of Rhode Island have worked on a windfall-profits tax on “big oil.” The bill is also backed by Representative Ro Khanna of California in the House.

Oil companies have reported historically high profits, along with plans to return more cash to shareholders, as prices of crude and refined products such as gasoline climb.

Josh Bivens, director of research at the left-leaning Economic Policy Institute, argues that profit margins account for the bulk of inflation. Overall prices in the nonfinancial corporate sector climbed at an annualized rate of 6.1% from the second quarter of 2020 to the end of 2021, he calculates. Some 53.9% of that can be attributed to profit margins, with less than 8% from labor costs, he says.

Voters also feel large corporations are using the pandemic to raise prices and increase profits, according to a survey conducted earlier this month by the progressive think tank Data for Progress in partnership with Groundwork Collaborative. At least 60% support both raising taxes on big companies as well as cracking down on those that raise prices unfairly.

Despite such analysis and overall impression among many voters, most economists go back to Yellen’s point on supply and demand. Recent gains in US retail sales have showcased enduring appetite among Americans to spend. And a shrinking profit margin at Target Corp. has showcased that inflation is proving damaging for some companies. Biden and Fed Chair Jerome Powell have each said that it’s the central bank — not politically elected officials — that bears the main responsibility for quelling inflation.

“The reality is companies are always ‘greedy’ and always trying to maximize profits,” said Marc Goldwein, senior policy director at the Committee for a Responsible Federal Budget. “The only way they have the ability to raise prices, and therefore profits, is if demand supports it.”

Many of the arguments for “greedflation” are “unequivocally wrong and confused,” Furman tweeted earlier this month.

Robert Reich, who served as Labor secretary under President Bill Clinton, says that legislative moves can be worthwhile even if companies aren’t the main problem.

“Nobody believes that price gouging is the main cause of inflation,” said Reich, who’s now a professor of public policy at the University of California, Berkeley. “The question really is whether corporate pricing power is aggravating the situation. And there’s a great deal of evidence it is.”

Pelosi and her leadership team have had a difficult time rounding up votes for the price-gouging bill in the House and may decide to pull it from the schedule. Even if it passes this week, it has little chance in the Senate where Republican votes will be needed. What’s more, Joe Manchin, the Democratic chair of the Senate Energy Committee, told reporters this week he wants to see evidence of gouging before declaring his support.

“I have some real concerns about elements of this bill — including the vagueness of what is defined as price gouging, as well as potential price controls and regulations that would affect small businesses like the actual gas-station owners,” Florida moderate Democrat Stephanie Murphy said.

The legislation would empower the Federal Trade Commission to fine companies “exploiting the circumstances related to an energy emergency to increase prices unreasonably.” Proceeds would be used to fund heating-fuel subsidies for low-income individuals.

Critics say it gives the FTC too much leeway in defining price gouging and could be used to simply fix prices.

“My concern is that this is how a socialist government operates,” House Energy and Commerce top Republican Cathy McMorris Rodgers of Washington said at a hearing this week.

That argument resonates beyond the GOP.

Such moves could make matters worse — similar to the long lines for gasoline in the 1970s — said Ben Ritz, director of the Center for Funding America’s Future at the Progressive Policy Institute, a center-left group. And if consumers are expecting shortages, they’ll go out and try to stockpile even more, which could continue to push prices higher, he said.

“The problem is we have too many dollars chasing too few goods — I don’t think you can fix that by simply banning price hikes in industries where prices are going up,” said Adam Ozimek, chief economist at the Economic Innovation Group. “It’s a huge distraction from focusing on the real issues that are driving inflation.”