There’s a big shift in the balance of power in the global gold market.

A relentlessly expanding physical hoard of bullion stored in London and New York means exchange-traded funds have usurped managed money in the futures market as the key driver of the price of the shiny metal.

For much of the grind higher that saw gold break above $1,800 per ounce for the first time in eight years last week, investors in the biggest futures market were reducing their positions. At the same time, ETFs were increasing their holdings to more than 3,000 tons — the highest total ever recorded. 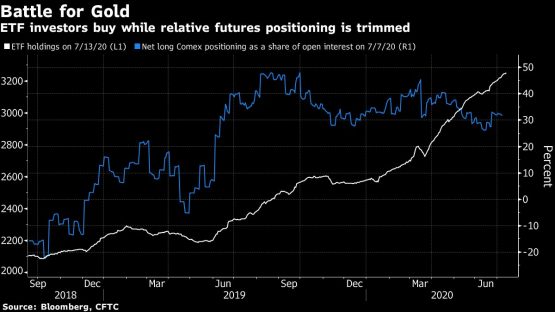 “ETFs are definitely the big boys now,” said David Govett, head of precious metals trading at Marex Spectron. “In the past they were certainly a factor, but there were a lot of others too — funds, CTAs, day traders. But they have become very cautious with the lack of liquidity in the market.”

It’s a radical shift in the market’s structure. The Comex exchange in New York is the biggest gold futures trading venue in the world, and managed-money positioning there historically tends to make or break rallies. Arguably the current bull market was triggered by a short-squeeze on Comex in 2018.

Yet between March 16 and July 7, net-long managed-money positioning as a share of open interest slumped from 45% to 31% as asset managers closed out leveraged positions, probably to meet liquidity needs elsewhere.

Over that period ETFs tracked by Bloomberg added more than 450 tons of metal, worth roughly $27 billion, and the price of spot gold rose almost 20%. Bernard Sin, a regional director at one of the leading Swiss refiners, said the passive products were “without a doubt” instrumental in sustaining the rally. For the time being, it looks like fast money in the futures market has given up the fight. Positioning bottomed out five weeks ago, setting up a powerful dynamic whereby both forces — futures and the ETFs — may be bullish at the same time.

“ETFs are telling a story about the longer term belief in gold,” said Ole Hansen, head of commodity strategy at Saxo Bank A/S. He predicts gold could test its record high of $1,920 in the coming months.

Commerzbank AG analyst Carsten Fritsch, for one, is telling clients to pay close attention to the money flowing across the passive market. In a recent note he pointed out that in just six months ETFs have bought more gold than all central banks in 2018 or 2019.

“This shows just how prominent a role this investment form is currently playing on the gold market,” he wrote.