A big week for global markets is off to a shocking start, with risk assets slumping in Asian trading on everything from China Evergrande Group’s woes to a further collapse in iron-ore prices.

The moves add to the wall of worry facing investors ahead of the Federal Open Markets Committee policy decision on Wednesday, a key test for Evergrande on Thursday, and imminent sparring about the U.S. debt ceiling and fiscal stimulus.

“Many pieces are in place for the kind of decline that will surprise almost everybody,” said Matt Maley, chief market strategist at Miller Tabak + Co. “Even though a lot of people are calling for a mild correction, we think the odds are much higher that the decline will be a deep one.”

Here is a graphical look at some of the key issues facing investors and how they are positioned: 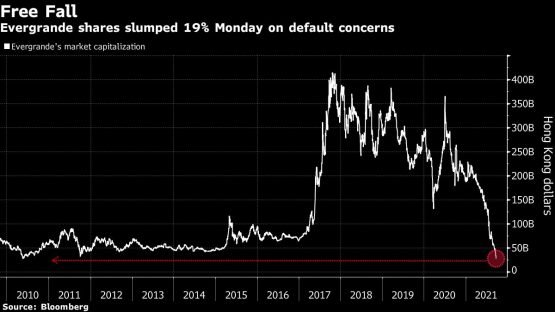 Angst about the world’s most-indebted developer is spreading as senior Chinese policy makers stay silent on whether the government will step in to prevent a messy collapse. It has sparked the biggest selloff in Hong Kong property stocks in more than a year and dragged down everything from banks to Ping An Insurance Group Co. and high-yield dollar debt.

Interest payments on two Evergrande bonds come due Thursday, a key test of whether the company will continue meeting obligations to debt holders even as it falls behind on payments to banks, suppliers and holders of onshore investment products in China.

The epic selloff in iron ore continued amid a rout that’s brought prices below $100 a ton. Futures in Singapore fell to $95 on Monday as China’s push to rein in its steel output hammers demand. Iron ore has more than halved since rising to a record in May with some market participants saying a decline to $70 is a possibility. For Treasury bears — the majority of Wall Street — this week’s Fed meeting represents one of the last prospective triggers this year for a decisive break higher in yields. Traders are anticipating officials will hint at a plan to curb bond buying and are ready for a shift in the central bank’s new forecasts for its benchmark rate. Primary dealers surveyed by Bloomberg News predict on average that 10-year yields will be more than 30 basis points higher by year-end. Yet the yield curve has flattened by the most since the early days of the pandemic, suggesting there is still the possibility of a dovish surprise.

Speculators have boosted their bearish bets against the Australian dollar to record levels amid the slump in iron ore, lockdowns across the country to prevent the spread of the coronavirus and dovish exhortations from central bank chief Philip Lowe.

Net-short non-commercial futures and options positions on the currency grew to the most on record last week, according to the latest data from the Commodity Futures Trading Commission. But as a key vehicle for risk on/off bets in the FX market, the bearish positioning is also likely influenced by growing pessimism about the strength of the global recovery. 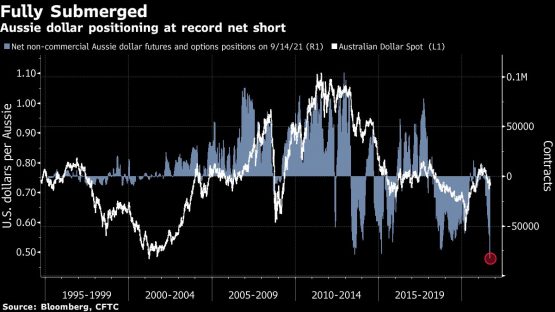 Hedge funds are also growing increasingly bearish on emerging-market stocks — seen by many as particularly sensitive to a Fed taper tantrum. Leveraged fund positions on futures linked to the MSCI Emerging Markets Index flipped to net short for the first time in more than a year, according to data from the Commodity Futures Trading Commission.

The gauge of developing-market equities has tumbled 8% this quarter — underperforming its developed-markets peer by about 10 percentage points — weighed down as well by Beijing’s crackdown on private enterprise. The S&P 500 Index has fallen for eight out of the last 10 sessions, albeit with a modest enough decline of just over 2%. The U.S. equity benchmark is sitting around its 50-day moving average, which has provided robust support for much of the year. The key technical level has become a closely-watched flashpoint as investors brace for a key week for determining market direction into quarter-end. Hopefully this will spur the next Chinese revolution and unseat the CCP and the totalitarian and now seemingly deranged Xi Jinping; insisting on “Xi Jinping Thought” being ingrained in school curriculum. 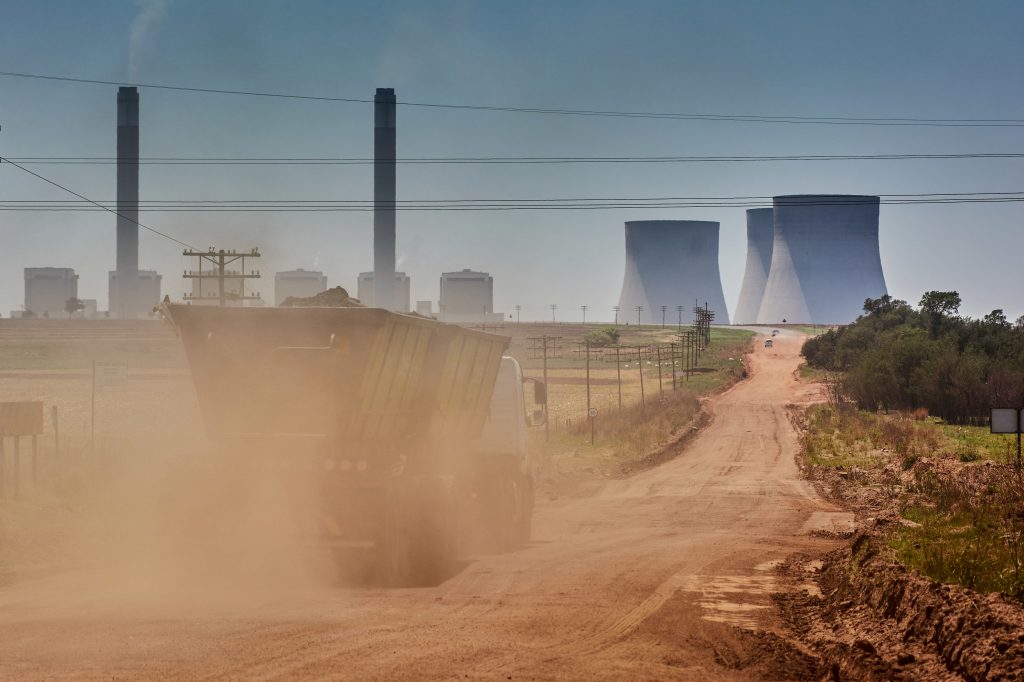