Hong Kong shares have tumbled in recent months as China and the US fight a trade war and street protests rattle the city.
Bloomberg News  /  11 September 2019 08:59 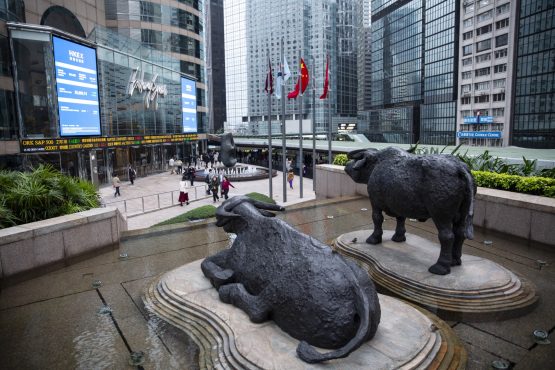 Analysts and investors predict the unrest in Hong Kong will begin to ease soon. Picture: Bloomberg

Hong Kong stocks jumped on Wednesday, with banks and developers propelling the Hang Seng Index toward a six-week high.

The equity gauge rose 1.7% as of 2:18 p.m. as lenders and property companies accounted for most of the top performers. Wharf Real Estate Investment and Hang Seng Bank led with gains of at least 4%. A gauge of property stocks rose 2.8% and was poised for its highest close since August 2.

Oriano Lizza, sales trader at CMC Markets in Singapore pointed to a recent tweet by a closely-watched newspaper editor that said China will implement measures to ease the impact of the trade war. The comment “makes me think there could be a bigger stimulus or quantitative easing in the system,” Lizza said.

Hong Kong shares have tumbled in recent months as China and the US fight a trade war and street protests rattle the city. The unrest has continued despite Hong Kong leader Carrie Lam’s move to scrap controversial extradition legislation. Sun Hung Kai Properties, the city’s biggest developer, is offering new homes at a discount.

The Hang Seng China Enterprises Index rose 1.5%. The benchmark Shanghai Composite Index slipped 0.4% as Beijing announced a range of US goods to be exempted from 25% extra tariffs put in place last year. The government is seeking to ease the impact from the trade war without lifting charges on major agricultural items like soybeans and pork.