How a billionaire’s cruise empire imploded in Hong Kong

It’s a stark example of how the coronavirus brought once-thriving businesses to their knees, which has the potential to impact cruise customers across the region.
By Yantoultra Ngui, Bloomberg 24 Jan 2022  06:58 Lim Kok Thay started a cruiseferry and gambling boat business in 1990s Hong Kong and turned it into one of Asia’s biggest cruise operators.

It was a labour of love, as well as a way to diversify the casino business set up by his father, Lim Goh Tong, in Malaysia. Under the now 70-year-old Kok Thay, Genting Hong Kong Ltd. expanded its fleet of ships, bought other cruise lines and even added a string of German shipyards to build its vessels.

Now, more than two years into the coronavirus pandemic, Kok Thay’s company is headed for liquidation. Genting Hong Kong filed a petition last week to wind up its business in one of the biggest stumbles by a cruise operator since the pathogen pummeled the industry. It’s a stark example of how the coronavirus brought once-thriving businesses to their knees, which has the potential to impact cruise customers across the region.

“I felt so upset when I heard the news,” said Chloe Then Sheau Nyuk, who used to board the company’s cruises in Penang in Malaysia and travel to Phuket and Krabi in Thailand. She said one of the things she most enjoyed was waking up with her husband at 6 a.m. to catch the sunrise from the upper deck.

Kok Thay founded the company that would become Genting Hong Kong in 1993, buying ferries from a bankrupt cruise firm to operate them under the Star Cruises brand. Its first ships were all second-hand, and it was only during the Asian Financial Crisis in the late 1990s that it started purchasing new ones.

Over the years, Genting Hong Kong extended its business beyond Star Cruises, partly by acquiring other cruise lines. It bought the Crystal Cruises brand in the US and set up the high-end Dream Cruises in Asia.

It was a time when the giants of the cruise world, such as Carnival Corp., were prospering as the sector continued to set new records for people traveling.

The company also snapped up several shipyards in Germany starting in 2015 to build its own vessels.

But as the pandemic forced cruise companies to halt operations, Kok Thay’s long-term bet on the industry — and the prospect of growing demand from China and the rest of Asia — started to unravel. While the company offered “seacations” as part of a broader trend of cruises to nowhere, it still reported a record $1.7 billion loss in May. The writing was on the wall.

Then earlier this month, its wholly owned shipbuilding subsidiary, MV Werften, filed for insolvency in a local court in Germany.

And last week, Genting Hong Kong, which is 76% owned by Kok Thay, filed its petition in Bermuda to wind up the company and appoint provisional liquidators. It said its cash was expected to run out around the end of January and it had no access to further funding.

The firm “exhausted all reasonable efforts” to negotiate with its creditors and stakeholders, it said in a statement to the Hong Kong exchange. Genting Hong Kong’s shares had plunged more than 60% from a November high before they were suspended on January 18.

Peninsula Petroleum Far East Pte. filed a lawsuit in the US seeking to recoup $4.6 million in total unpaid fees for bunker fuel it had delivered to three of Genting’s ships since 2017. The Crystal Symphony, a luxury cruise ship operated by Genting Hong Kong, was to be seized if it had docked in Miami as scheduled, according to J. Stephen Simms, the lead attorney representing Peninsula Petroleum Far East who said he had been told of the plan. Ship-tracking data indicates the vessel docked in the Bahamas on Saturday evening, where a US arrest warrant can’t be executed.

Bookings are still available on Genting Hong Kong’s website for cruises to nowhere from Hong Kong and Singapore. Dream Cruises sailings that have already been scheduled will proceed, according to a company representative. 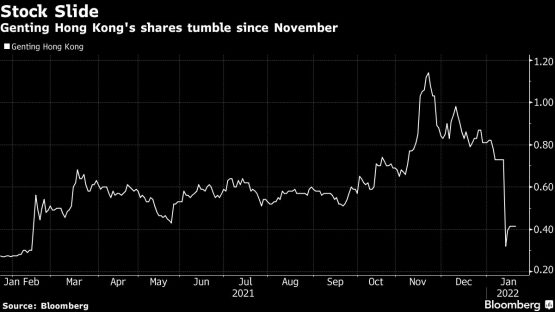 Genting Hong Kong’s difficulties reflect its focus on Asia, where big markets such as China and Hong Kong are still shut down and pursuing Covid-Zero strategies. Other cruise operators, such as Carnival and Royal Caribbean Cruises Ltd., are rebounding as markets such as the US, the Americas and Europe are now “living with the virus.”

Even though Kok Thay has been dealt a blow in the cruise business, it’s just one part of his sprawling group, which his father started with the hilltop casino resort now called Resorts World Genting more than an hour by car outside Kuala Lumpur. It’s the only licensed casino resort in a Muslim-majority country that frowns on gambling.

Kok Thay, who keeps a low profile, and his father worked to expand and diversify the business beyond Malaysia, building it into one of the largest gaming and entertainment conglomerates in the world. Today, Genting also operates casino resorts in the UK., Singapore and the US, where the $4.3 billion Resorts World Las Vegas opened in June.

His father, who was born in China and moved to Malaysia when it was still a British colony, passed away in 2007 after a short illness. Just under four years earlier, Kok Thay had already taken the helm of the group. 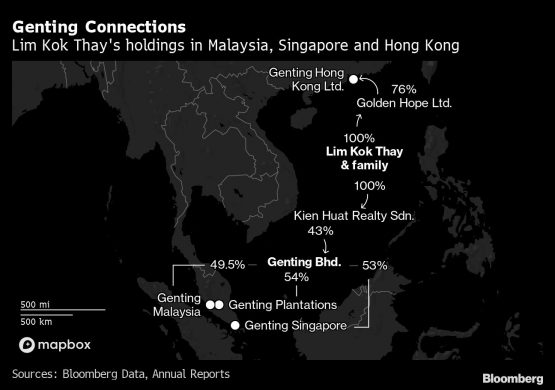 One question is whether Kok Thay may try to bail out Genting Hong Kong with help from other group companies. Sister firm Genting Malaysia Bhd., which operates the country’s casino resort, has invested in Genting Hong Kong before, more than two decades ago. It sold its 17% stake for $415 million in 2016.

Genting Malaysia, which bought the Equanimity superyacht seized by Malaysia’s government from fugitive financier Jho Low for $126 million in 2019, is gearing up to open a new $800 million outdoor theme park in the country. Genting Singapore Ltd. is conducting a S$4.5 billion ($3.3 billion) expansion of its Resorts World Sentosa, one of the largest casino resorts in Southeast Asia. None of the companies has cross shareholdings with Genting Hong Kong, except for Kok Thay owning shares in each of them.

“The expansion plans of the other Genting companies should not be negatively impacted,” said Samuel Yin Shao Yang, an analyst at Maybank Investment Bank Bhd. in Kuala Lumpur. “The debts at each company are ringfenced” at those companies, he said.

But Rick Munarriz, a contributing analyst at the Motley Fool, said he expects more cruise companies to follow the same path.

“Genting Hong Kong won’t be the last cruise operator to run out of money,” he said. “Creditors and stakeholders are tired of throwing good money after bad.”