The volatility in SA has miners seeking to balance exposure.
By Felix Njini, Bloomberg 9 Oct 2019  09:00 Southern Africa is home to the world’s richest platinum deposits, but when Impala Platinum pondered how to invest its windfall profits it chose North America instead.

The acquisition of North American Palladium is partly a bet on platinum’s sister metal palladium continuing to rally, while Implats Chief Executive Officer Nico Muller has also stressed the appeal of a relatively quick payback from low-cost, mechanised assets. However, the deal is also a geopolitical play as the Johannesburg-based miner seeks to balance exposure to its more volatile home region.

“The diversification into North America provides a hedge against some of the socio-economic, political and structural risks the company faces in South Africa and Zimbabwe,” said Christopher Nicholson, an analyst at RMB Morgan Stanley. While South Africa’s platinum operations are far more robust than the nation’s gold mines, and Implats returned to profit this year on the back of record palladium prices and a weaker rand, its decision highlights some of the wider industry challenges.

Anglo American CEO Mark Cutifani last week said there are no shortage of geological opportunities in South Africa, but to attract investment requires political stability and regulatory clarity. The “parlous state” of public finances also remains a challenge, he said, adding that miners must work with the government to tackle unresolved issues in the nation’s Mining Charter, which seeks to address inequalities resulting from apartheid.

“There are many other factors besides mineral endowment that influence where investors decide to put their money, all of which drive reassurance to investors about the security of their investment over time,” Cutifani said.

While Implats had investment options in South Africa, the longer payback period involved in building a new mine was a deterrent.

“If you want exposure to a producing asset, you would have to look at North America or Russia,” said Mandi Dungwa, an analyst at Kagiso Asset Management in Cape Town. “If you are trying to reduce risk, Canada is a very attractive mining jurisdiction compared to some of the issues we have here.” 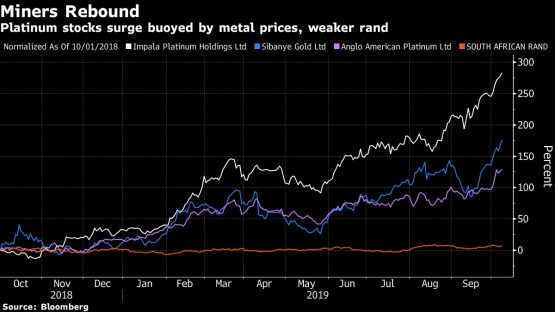 Anglo American Platinum CEO Chris Griffith said last week that South Africa’s government needs to resolve the issue of community disruptions around mines, which is leading to huge losses for producers. Labour disputes, crime and xenophobia are deterring investors, while policy differences between government and ruling African National Congress are also a concern, he said.

Sibanye, which became the largest platinum miner after acquiring Lonmin earlier this year, may move its primary listing from South Africa because of increasing uncertainty, CEO Neal Froneman said in March.

Geographical diversification is a secondary consideration, but has its advantages, said Implats CEO Muller. That includes the absence of power cuts, which have plagued South African industry as state-owned utility Eskom struggled to meet demand.

“We don’t have exposure to Eskom that side, there is lower risk associated with availability of cheap water and of course we are to a large extent shielded from the economic crisis we are experiencing in Zimbabwe,” Muller said.

Despite the challenges in southern Africa, not everyone is convinced by Implats’s overseas venture.

The deal could prove costly should palladium prices fall, according to Johann Steyn, an analyst at Citigroup Inc. Steyn said Implats could have bought Royal Bafokeng Platinum Ltd. to exploit synergies from mines adjacent to its own Rustenburg operations.

“If we are correct in our forecast that palladium will revert back to a long-term average of $850 an ounce, then this deal could turn out to be value destructive,” Steyn said. “If it holds, then a lot of value will be created.”

Palladium traded at about $1 645 an ounce as of 2:11 pm in London, after climbing to a record of $1 701.93 last week. Implats has almost tripled in value this year, making it the best performer on the Johannesburg stock exchange. The shares were up 0.2% on Tuesday.

While Implats CEO Muller said the profitability of NAP will help the company reinstate dividends, it should have prioritised making payouts, according to Rene Hochreiter, an analyst at Noah Capital Markets.

“Maybe there aren’t many assets out there, but I would have spent the money on something better,” Hochreiter said. “It’s time for them to start paying dividends instead of blowing the money on expensive acquisitions.”

It again proofs the short-sightedness of company directors in not remembering what happened to palladium when it outperformed platinum with more than 50% in the past. These to metals have very similar uses, so why would someone keep buying Palladium at double the prize of platinum. The most important question however is, can these greedy companies reap the benefits of their investment within the next 3 months or will they suffer the same consequences as Sasol with their American shale venture.