US stocks are on a roll — but they’re nowhere near bubble territory yet, according to a JPMorgan Chase & Co analysis.

The S&P 500 would need to reach or exceed 3 700 in the second half of the year to show a pattern that’s consistent with prior market bubbles, JPMorgan technical strategists Jason Hunter and Alix Tepper Floman wrote in a note Monday. That would be about a 13% gain from the index’s close on the same day.

Market bubbles often start with a two- to three-year period of positive rolling 12-month performance, the strategists wrote — which is then followed by a yearlong, accelerated rally period. This was the case with situations including the Dow Jones Industrial Average in the late 1920s, gold in the late 1970s, Japan’s Nikkei 225 Index in the late 1980s and the Nasdaq 100 Index in the late 1990s that were widely seen as bubbles, they said.

“The index would have to meet or exceed 3 700 in the second half of the year for the 12-month growth rate pattern to line up,” the strategists wrote. “The 2017-2019 S&P 500 growth rate arguably matches the performance leading up to prior bubble formations. However, the most important phase and yearlong period of elevated performance still needs to develop before we would classify price action as a bubble.” 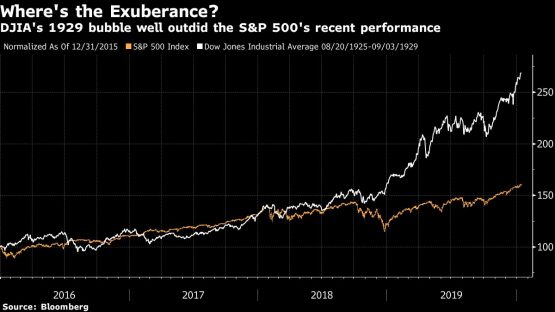 Strategists tracked by Bloomberg don’t have 3 700 much on the radar for this year just yet. As of last month, the highest target among them for year-end 2020 was 3 500, from John Stoltzfus of Oppenheimer & Co JPMorgan’s equity strategist, Dubravko Lakos-Bujas, sees 3,400. BTIG’s Julian Emanuel says it’s possible the gauge hits 3 950 this year, if the fee war in the asset-management industry helps fuel a crush of investing from the public — but his base case forecast is 3 450.

“The rally would have to accelerate beyond our already bullish expectations in 2020 for the pattern to match past bubbles,” the JPMorgan technical strategists said. “While an equity bubble is not part of our base-case outlook for 2020, our current trailed-stop strategy is in part structured to recognise that as a tail risk.”