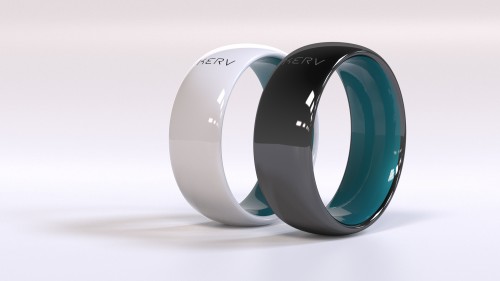 That is the view of Philip Campbell, founder of London- based startup Kerv, whose firm has produced a smooth, shiny piece of wearable tech that aims to tap into the growing market for contactless payments.

The Kerv ring uses Near Field Communication (NFC) to let users make payments of up to £30 ($46) by simply waving your hand at shop checkouts and public transport barriers, much like contactless credit or debit cards. It doesn’t need charging nor does it need to be paired with a smartphone.

Kerv is not the only wearable device with payment functionality – NFC-enabled smartwatches like Apple Watch and wristbands like Barclaycard’s BPay also let you pay for goods – but it is the first payment ring. Campbell sees flaws in rival payment devices, though, describing them in a statement as either “eye-wateringly expensive” or “thoroughly unattractive.”

Born Out of Frustration

Campbell began building the Kerv ring while running a marketing agency that serves the payments industry. “We were being asked to promote payment products where the user was seen as not very important or the technology wasn’t there,” he says. “We just got frustrated and decided to do it better ourselves.”

The project is seeking funding through crowdfunding site Kickstarter, raising more than half of its £77,000 target within five days at the time of writing.

The idea was spurred by the fact that most of Europe will accept contactless payments by 2020, as Visa and Mastercard mandate retailers to upgrade their point-of-sale terminals. The U.S. lags behind with payments technology, only just launching chip and pin this year.

“The ability to pay for public transport is the application most likely to drive adoption,” Saverio Romeo, a wearable technology analyst at Beecham Research, says of Kerv. He adds that the upper price limit for contactless payments will limit its use – as will the reliance on contactless infrastructure, currently concentrated in cities. Users need to set up an account with Kerv to use it as a digital wallet – much like pre-pay credit cards or London’s Oyster travel card system. Linking Kerv to another bank account allows for automatic top-ups. Kerv takes a small fee with each transaction, paid by the merchant — and it’s accepted wherever MasterCard is.

Looks-wise, the accessory is simple and sleek, made from the same material used to craft ceramic dental crowns. The material was chosen because it doesn’t interfere with the small electromagnetic field that powers the contactless functionality; it’s also waterproof, hypo-allergenic, scratch-resistant, and comes in a range of sizes.

On the face of it, Kerv looks similar to NFC Ring, a product that launched in 2013. However, the latter focuses on unlocking doors and mobile phones – something Kerv can also do – instead of payments.

A more direct competitor is Barclaycard’s BPay wristband, which is linked to a proper licensed bank that customers know and trust – but is hampered (in Campbell’s view) by ugly design.

Barclaycard says it’s “constantly refining and improving” the band based on customer feedback. “People told us that style and design are key, so we made some big changes to the latest generation to make it more stylish and comfortable, which has had a really positive response,” said a spokesman. While the ring is Kerv’s flagship launch product, Campbell says Kerv is proposing much more than a single device. “We’re trying to design a digital wallet with a much smoother user experience and then connect that to multiple hardware devices,” he says.

Users of the Kerv service will get an account number and sort code, just like at a regular bank account, and they’ll be able to request a contactless card should they want one.

Kerv is categorized as an electronic money-issuer rather than a bank, and intends to then tackle friction points in the consumer experience of banking. One use could be to set up prepaid accounts so teenage children can learn how to manage money. Currency cards, which offer better exchange rates for spending money abroad, but which don’t work so well back home, are another target.

“There ought to be a way you have a product you can use at home and abroad and not be penalized for doing so,” Campbell says.