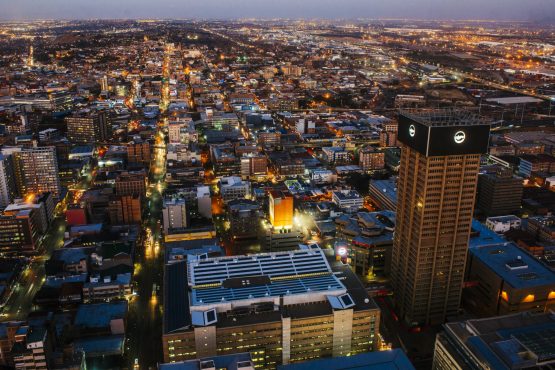 South African Finance Minister Tito Mboweni’s budget this week is unlikely to convince Moody’s Investors Service that he has a credible plan to rein in government debt.

Of 19 economists surveyed by Bloomberg this month, 14 expect Moody’s to downgrade the country to junk this year and nine of those say it’ll happen in the first half. That’s after the ratings company in November cut the outlook on the nation’s assessment to negative and said it would look to the February 26 budget for a feasible strategy to contain rising debt.

Bailouts for state-owned companies including Eskom and South African Airways have pushed up government debt in an economy that’s growing at less than 1% a year and not collecting enough revenue.

Pledges by Mboweni to lower spending will be difficult to push through, even after President Cyril Ramaphosa said in his state-of-the-nation address the minister will outline measures to reduce expenditure and improve its composition. Labor costs make up 35% of spending and trade unions have ruled out a review of an existing three-year wage agreement that expires in 2021, saying they won’t accept pay cuts in the next deal.

Nothing will be done to limit the growth in the wage bill, according to Johann Els, chief economist at Old Mutual Investment Group in Cape Town.

“While I expect Treasury to make an attempt to get the deficit under control and to try and stabilize the debt ratio, I think it is unlikely that they will be able to do enough to prevent a Moody’s ratings downgrade,” he said. 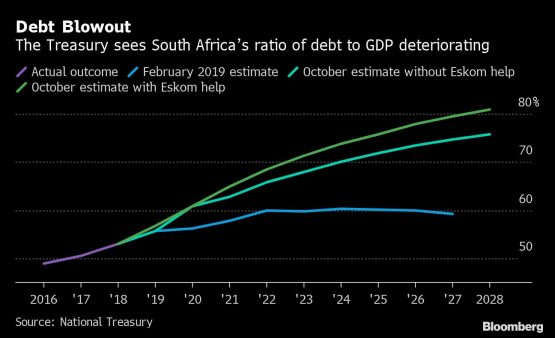 The income side of the budget also won’t solve the problem. Revenue collection is forecast to undershoot for the sixth straight year and the minister’s scope to plug the gap by raising taxes is limited by slow economic growth and an unemployment rate near 30%. Only five of the economists surveyed said they expect an increase in the value-added tax rate.

After leaving personal income-tax brackets unchanged and not adjusting them for inflation in the last budget, Mboweni’s remaining options to increase revenue include adjusting capital-gains tax, levies on fuel and luxury goods, excise duties and charges on sugar-sweetened beverages.

“Increasing the tax burden on the economy, as well as cutting government expenditure at the same time, will have a very negative bearing on economic growth,” said Danelee Masia, a senior economist at Deutsche Bank. “Relying mainly on tax measures to narrow the deficit, as has been done in the past, has become counterproductive.”

That all means the budget deficit could be even wider in the year through March 31 than Mboweni projected in October. According to the median estimate of 24 economist surveyed by Bloomberg, the shortfall for this year will be a decade-high 6.3% of gross domestic product and will widen to 6.4% in 2020-21. Moody’s is scheduled to announce its assessment of South Africa on March 27. A downgrade would leave the country without an investment-grade ranking for the first time in 25 years. That would cause it to fall out of the FTSE World Government Bond Index, which could prompt a debt selloff and outflows of as much as $15 billion, according to Bank of New York Mellon Corp. While the headline figures in the budget speech will be important, signals from Mboweni that the government has feasible plans to stem the debt and deficit metrics over the medium to longer term “will probably prove more powerful than the near-term deterioration we expect to see in the numbers,” said Jeffrey Schultz, a senior economist at BNP Paribas South Africa. However, that’s unlikely to prevent a junk rating.

“South Africa’s urgent need for vital structural reform to raise the current trends in potential and nominal GDP is clear,” he said. “As this is likely to take longer to get right than many anticipate, we maintain that a Moody’s rating downgrade is inevitable in 2020.”

“We expect modest changes to the economic and fiscal forecasts. The big question is whether the government will take action to stabilise debt. We think political constraints mean it won’t do anything meaningful. As such, Moody’s will probably place the country’s sovereign rating on review for a downgrade in March.”

We just need to be upgraded or downgraded now. Even if we are downgraded the rand will probably rise because the news is priced in. Although I do hope the budget pulls a rabbit out of a hat and that Moodys keeps us stable. Things are getting better in SA, and we just need some breathing space. Please give us that space!

In other words-the corrupt ANC and brainless voters are following like sheep the exact road to ruin like all the other failed African countries. And so confirm African nations notorious tendency to drag their people into man made poverty and misery.

The heading of the article is the understatement of the year:

The fix Mboweni is faced with is simple and requires Political will, you don’t even need wisdom or a degree to see why we hitting a wall!

We all know that 36% of Governments spend goes toward the wage bill. Cut it back to 20%

Find someone who can lead this country from the front, even a Robot will suffice. Anything better than Squirrel is already a step forward

This is but a few suggestions: Sadly the Unions rule the roost and the tail wags the dog!

‘the news is priced in. What is that? Every time the sh@t is about to hit the fan we are told not to worry, it is priced in.

Yes. Much like the bad news for Sasol was priced in.

You are 100% correct.
We have the greatest people, most natural resources, best agricultural land and best tourism destination in the World and we cannot grow our economy.
Watching the Cricket over the weekend, I noted how diverse the spectators were and how they were all having a good time together – a true rainbow nation. And then I thought of SONA and realised how much our Parliament is not representative of our nation. Its a disgrace.
Hopefully Moboweni will be able to perform a miracle and stop the leaks.

We expect too much from Mboweni and Cyril. It’s not going to happen, they aren’t the real leaders, only puppets

Government isn’t the solution, THEY ARE THE PROBLEM!

This is the most expensive circus ticket i’ve ever bought to watch clowns at work (how i wish it were “men at work”) ..

Real men who can Govern and lead without fear or favor

Like the municipality Makhanda has set an example it is time for this pathetic government to face some class action and whatever more the legal brains can add. They are beyond useless

Tito …5% once-off surcharge on taxpayers earning over R50,000 per annum

…even better: cut the size of Govt by 50%. (…the felt effect will be way less than 50%…the rest of employees will have to start working 😉

There is never “once-off” and “this time it’s different”. This is the back-breaking straw that is pushing even more professionals, academics and blue-collar tradespeople out of the country.

It’s the same with SAA. The R3,5 bill loan of late has been spent..It’s gone..They need more

Similarly, tax the blue collar worker once off? Nonsense ,all they are doing is:

Kicking the can further down the road

They only need to address few pertinent issues (one being the wage bill, cut it by 40%) , the other BEE (bring back the skill) and we’re on our way 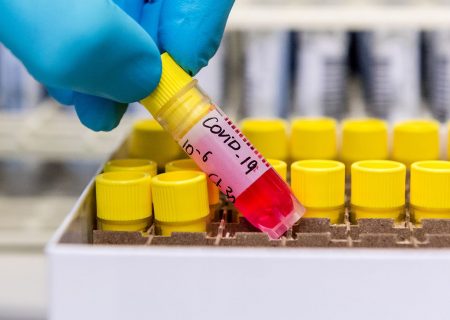