Murders increase to highest in more than decade The number of murders in South Africa climbed to the highest level in more than a decade as the police force struggled to get to grips with violent crime.

The number of homicides rose by 1.4% to 21,325 in the 12 months through March — an average of 58 a day — the police service said in its annual crime-statistics report. The murder rate of 36 per 100,000 people was little changed from the previous year and compares with an international average of seven per 100,000. The number of rapes, sexual offenses and car hi-jackings also increased, but property-related crime declined.

“We are not where we want to be,” Police Minister Bheki Cele said at a briefing in Pretoria, the capital. “However we are pleased with the improvements in most stubborn crime categories.”

Violent crime is fueled by widespread alcohol and drug abuse, and perpetrators often know their victims, the police data show. A lockdown imposed to curb the spread of the virus should have a positive impact on the current year’s statistics, with preliminary data showing it helped curtail homicides and other crimes. 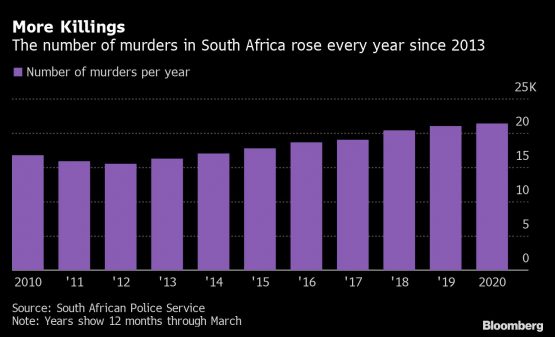 The police force and national prosecuting agencies saw an exodus of key personnel during former Jacob Zuma’s scandal-marred nine-year rule, undermining its ability to bring criminals to book. While President Cyril Ramaphosa, who succeeded Zuma in early 2018, has said that combating crime is one of his top priorities, his administration has struggled to rebuild the law-enforcement agencies.

So please Mr Cele – hear our formal request.
Can you request Mz NDZ to include Homicides, Rape and HiJackings to be included on your National Disaster Command Council list for banning during lockdown – along with smoking and alcohol.
Maybe you can get your lazy buggers to actually go out and catch some real criminals for a change – along with beachgoers, surfers and us illegal smoke and beers contraband seeking citizens!!!

SAM The Taxman 7 days ago

This means on average a person is murdered every 25 minutes! This is close to a war level killing rate. Meanwhile the hat fetish clown simply changes hat colours while being escorted by armed thugs in a fleet of armored BMWs.

But then the average voter approves of this by voting for the ANC.

If you have skills or money-flee this crime ridden bankrupt state!

Cops too busy chasing surfers and finding cigarettes to confiscate for themselves than to attend to real crimes !!!!

Add the taxi killing machine deaths and Cov 19 deaths are nothing.