Factors this coming week that may provide further support for US stocks include a Fed meeting.
By Reuters 25 Oct 2015  10:53 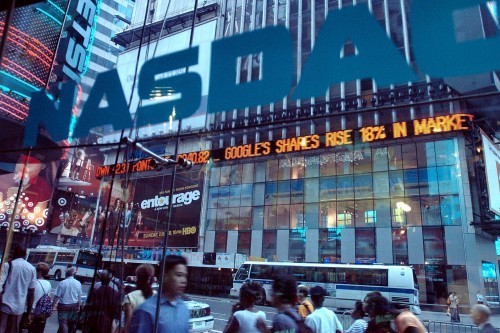 The Nasdaq 100 index, dominated by US technology stocks, may set a record high next week, helped by good earnings from Apple Inc expected on Tuesday.

Technology shares led the US stock market’s recovery this week from its worst correction in four years in August, thanks to gains in Alphabet, Amazon and Microsoft, after the three companies reported better-than-expected earnings results.

Shares across Asia, Europe and the Americas all climbed, boosted by Thursday’s message from European Central Bank chief Mario Draghi that he was ready to increase the ECB’s bond buying program, and by an interest rate cut by China’s central bank.

Factors this coming week that may provide further support for US stocks include a Federal Reserve policy meeting, which is not expected to raise interest rates yet, a report on US third-quarter economic growth, and earnings from Apple.

Intel and Microsoft have seen their stocks recover more than 30% each since Aug. 25, while Amazon and Facebook rose 28% and 23%, respectively.

In contrast to Microsoft, Facebook, Alphabet and Amazon, Apple shares did not post record or multi-year highs this week, even though it rose 7.2%, the largest weekly gain in a year.

On Tuesday, though, Apple is expected to report $51.1 billion in revenue, a 21.3% increase compared to the same quarter of last year. Earnings are seen at $1.879 per share.

“The bar has been raised a bit on its earnings report from where it was a week ago. The price action is telling you there’s more optimism built into it,” said Michael James, managing director of equities trading at Wedbush Securities in Los Angeles.

Options market action shows traders expect Apple shares to move roughly 5.0% by the end of next week. The average move for the stock the day after its report in the last eight quarters was 4.4%, up or down.

“Will an above-estimates from Apple and raised guidance help? Sure it will. But we could still get there without that happening,” said James of the possibility of the Nasdaq 100 hitting a record.

“The power of the moves in some of these large cap tech stocks has been breathtaking,” he said.

Chip makers were also among the top five percentage gainers in the Nasdaq 100 since the index closed at its 2015 low on Aug. 25, with SanDisk topping the list with a 70% jump on the back of a takeover bid from Western Digital.

The overwhelming leadership from established technology companies is a positive for this market move higher, according to Kim Forrest, senior equity research analyst at Fort Pitt Capital Group in Pittsburgh.

“The last time the Nasdaq 100 was the market leader a lot of it was speculative investments, but these (tech) companies actually return money to shareholders,” she said.

“Tech deserves the leadership; the stock market is rewarding growth.”

BIOTECH THE FLIP SIDE TO TECH STOCK LEADERSHIP

While technology stocks have led the market recovery, biotech stocks have been a drag on performance.

The Nasdaq Biotech Index is down 3.5% from its Aug. 25 close, and more than 20% below its year high. The three index components with the largest declines in market capitalization in the last eight weeks are Mylan, Illumina and Biogen.

“There has been a major rotation out of healthcare and into tech and it has continued after the recent earnings reports,” said Wedbush’s James, referring to strong results from Amazon, Microsoft and Alphabet.

Biotech stocks were shaken in September when US presidential candidate Hillary Clinton first tweeted concerns about drug prices and the selling spread to other areas of the healthcare sector. Investors have been dumping shares of everything from hospitals to traditional pharmaceutical companies and insurers in recent weeks.

Since peaking in July, the Nasdaq Biotech Index has fallen 23%, the broad S&P Health Care Index has lost 12% and the S&P 500 Health Care Facilities index is down 31%.

Fund managers now say they expect regulatory threats on drug prices, disappointing earnings, higher interest rates that could hurt heavily indebted hospitals, and the loss of the initial Obamacare boost to business to all weigh on health sector stocks this year.