Nigeria opened a new front in the oil price war between some of the world’s largest Opec+ countries, offering to sell its crude in April at unusually large discounts in an effort to undercut its rivals. Even so, traders said the West African country may not have gone cheap enough.

Exports of Qua Iboe and Bonny Light crude — two banner Nigerian grades — will be sold in April for discounts of more than $3 a barrel to the international Dated Brent benchmark. Even in the depths of the 2008-09 recession, neither grade was sold anywhere near as cheap, but a collapse in demand caused by the coronavirus — and a pricing war led by Saudi Arabia — has changed everything. 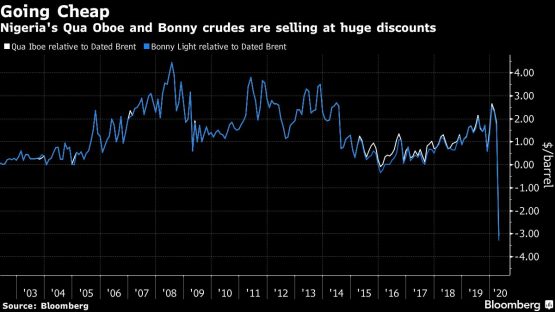 The new front in the price war is important because in previous battles for market share, such as in 1985-86 and 1998-99, it was West African oil producers who finally broke the market after discounting their crude. West African crude competes directly with oil pumped in the North Sea, which is a benchmark for crude worldwide. If Nigeria and other regional producers discount their crude significantly below North Sea Brent, it will force the Brent market to follow, piling downward pressure on prices.

Some of that was already in evidence on Monday with Forties crude trading at the lowest in 11 years on a price-discovery window organised by S&P Global Platts.

Typically, refiners are willing to pay a premium for Nigerian crudes because they yield more gasoline than others. But with countries locking down their population, demand has collapsed, and with it interest in West African crude.

Even at the huge discounts being offered, several traders still questioned whether Nigerian barrels will clear. The collapse in oil demand caused by the coronavirus — coupled with other producers also discounting deeply — mean it could be a struggle to find buyers.

Nigeria is the latest nation to respond after Saudi Arabia, the world’s top exporter, made unprecedented discounts of its own. The Middle East country’s Arab Heavy is now effectively pricing at about $13 a barrel in Northwest Europe once the kingdom’s discount has been applied to the crude.

Nigeria’s barrels are less dense and lower in sulfur than those typically found in the Persian Gulf. That makes them more directly comparable — and competitive — to the grades that help to define the Brent benchmark.

If someone in our Minerals dept that has half a brain can you please replenish our strategic Stock Piles of Oil at current prices that was STOLEN by your previous parasites…..thanking you in advance.