Nigeria runs on generators and nine hours of power a day

Nigeria can act as a lesson for Eskom on how not to reform a country’s troubled power industry.
Anthony Osae-Brown, Ruth Olurounbi and Gordon Bell, Bloomberg  /  23 September 2019 06:31
4 To keep out the darkness, Nigerian households own and operate an estimated 22m small gasoline generators. Image: Shutterstock

Kabir Sabo’s sewing machine hums busily as he hems a “babariga,” a popular dress in northern Nigeria, in his small corner shop on the outskirts of Abuja. It can hardly be heard over the sound of Nigeria’s worst problem.

“When you are a small business owner in a country where there is no power, it really is depressing,” he said. “I have on multiple occasions shut down to take up a monthly paying job. It’s difficult to run the business when most of your earnings go on paying bills, buying fuel and all sorts of things.”

In Africa’s most populous country, almost everyone depends on generators, including President Muhammadu Buhari. His office will spend 46 million naira fuelling generators this year. In the country’s 2019 budget, there are 1 358 generator-related expenses.

The shortage of power is one of the biggest issues Buhari faces as he tries to reform a $400 billion economy that is too dependent on oil exports, has too many inefficient state-owned enterprises and is still struggling to recover from a slump in 2016.

“Lack of access to electricity and unreliable electricity supply are key constraints to doing business in Nigeria,” the International Monetary Fund said in its latest economic report on the country. It estimated the annual economic loss at about $29 billion. In a 2014 World Bank survey, 27% of Nigerian firms identified electricity as the main obstacle to doing business.

Households with access to on-grid electricity had an average power supply of only 9.2 hours a day in the first half of 2019, according to a survey by the country’s leading polling agency, NOI Polls. Electricity production per capita is less than 15% of the average of emerging-market economies and less than 25% of the sub-Saharan Africa average, according to the IMF. 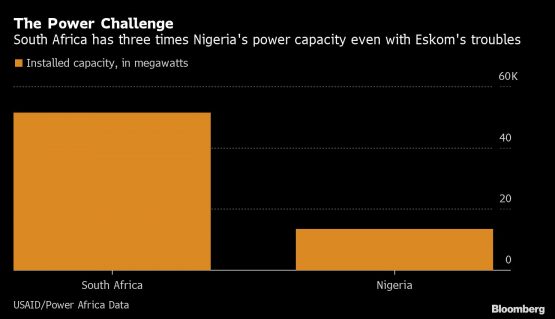 To keep out the darkness, households own and operate an estimated 22 million small gasoline generators, whose combined generating capacity is eight times higher than on-grid supply, according to a June 2019 presentation by Dalberg, a global policy and advisory firm. Businesses and individuals spend about $12 billion a year, twice the country’s annual infrastructure budget, fuelling these generators.

Nigeria, which also has the continent’s largest gas reserves and ranks ninth globally, consumed an average 3 713 megawatts of electricity from the grid in 2018, data published by the country’s central bank shows. That’s about a 10th of what Eskom made available in South Africa, a country with less than a third of the population and which itself is subject to rolling blackouts.

Nigeria is only able to send about a quarter of its total power capacity to homes and businesses due to a poor and dilapidated power infrastructure, much of it installed in the 1980s. The country’s transmission lines can “theoretically” carry about 7 500 megawatts, according to the country’s electricity regulatory authority.

This is similar to the solution now being proposed for Eskom. But Nigeria also shows how not to reform the power industry.

The government retained the right to determine tariffs through a regulatory agency, which raised power prices in 2015 — and quickly reversed it as elections approached. Since then electricity tariffs have remained largely unchanged even as inflation has remained above the central bank’s upper target of 9% since 2015 and the naira is 50% weaker against the dollar.

Tariffs should go up by a minimum of 50%, according to the IMF, but maintaining prices at current levels has become a fiscal burden. Since 2015, the government has provided three bailouts via the central bank for the electricity sector, amounting to 1.5 trillion naira to plug revenue shortfalls.

It doesn’t help that power customers are often unwilling to pay for the electricity they consume. Distribution companies collected payments for only 64.1% of electricity supplied in the first three months of 2019, according to a report by Nigeria’s power regulatory agency. The distribution firms in turn paid for only 28% of power they received from generation companies and the transmission network.

Buhari’s 2017 recovery plan for the industry hasn’t made much progress, and now the government is proposing a staggered tariff increase from January. The proposal will rates by an average 27% for some users.

“The problem is, transmission will still be in the hands of the government, which is inefficient and unable to make the required investment,” Nwanze said.

In Sabo’s small shop, he frequently deals with impatient customers whose clothing orders have been delayed because of long blackouts.

“I am willing to pay more if it means I will not have to rely on the generator to run my business,” he said. “Should I have that choice, I’d pay maybe two naira more.”

African leaders should bow their heads in shame. Can’t run a country even if their lives depend on it….

Looking at the past in a negative and self-pitting way has destroyed nations.

Petrol and diesel generators are by far the most expensive form of power, small petrol generators typically work out to R8 per kWh

Large diesel generators can get down to R4-R5 per kWh.
Residential PV + Lithium storage might have a much higher initial cost, but I crunched the numbers on this just last week, and its already at R2.5 kWh