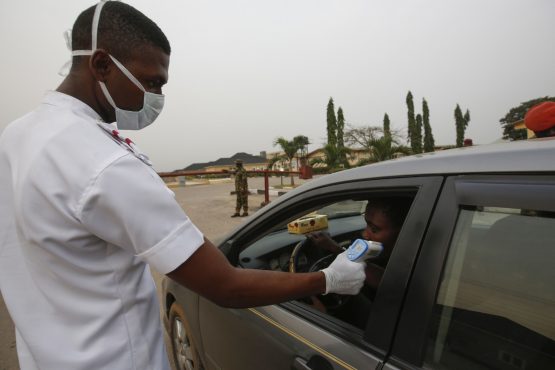 A Nigerian army health official performs a temperature check on a visitor to the entrance of the Nigerian Army Hospital in the Yaba area of Lagos, Nigeria. Image: George Osodi/Bloomberg

The Nigerian Army is preparing to forcibly transfer the sick to hospital and enforce curbs on movement to try to shield the country from the coronavirus, and is leasing equipment for “possible mass burial”, according to an army memo seen by Reuters.

The memo from Army headquarters also outlines plans to protect government food storage from looters as Africa’s most populous nation braces for the illness to spread further in the country.

“Following the rise and continuous spread in cases of the coronavirus disease (COVID-19) in Nigeria, the (Chief of Army Staff) has deemed it necessary for all to take protective measures to ensure the safety of (army) personnel and their families,” the memo said.

There are currently 46 confirmed cases in Nigeria, and one death, but the infection has hit the top levels of society, infecting President Muhammadu Buhari’s chief of staff.

With a population of 200 million, 20 million of whom are packed into the commercial capital of Lagos, many fear the virus could spread quickly without containment.

The memo said the army was suspending leave passes for all personnel and called for them to be on “maximum security alert and be ready for deployment.”

The virus has swept across the world, killing thousands and forcing millions into quarantine. Several nations have activated armed forces to help combat it.

South Africa deployed its army to enforce a 21-day lockdown that begins this week, and U.S. President Donald Trump activated the National Guard in New York, California and Washington.

The U.S., French and Moroccan armies have set up field hospitals, and Russian President Vladimir Putin ordered the army to carry out drills to increase its readiness.

Nigerian Finance Minister Zainab Ahmed told the heads of parliament’s two houses that the government would release 6.5 billion naira ($18 million) to the National Centre for Disease Control to help fight the virus, the Senate president’s office said in a statement.

And the central bank said it would remain open amid the global outbreak to ensure “monetary and price stability”.

Also on Wednesday, the governor of the southern Rivers State said he would close the state’s borders to people crossing from Thursday.

The state’s capital, Port Harcourt, is the gateway to the oil-rich Delta region, and companies such as Nigeria and Royal Dutch Shell have key offices in the city.

Oil provides more than half of Nigeria’s government revenue.

(Africa has an amazingly LOW number of infections/deaths. Different gene pool? Logic explanation could be that poor Africans do not travel the world…many don’t know WHERE Italy is, for starters. We in Africa die of many other diseases/famine….has the Covid-count got lost in it. Or it takes time to news to travel from rural regions to cities. Perhaps, by the time the developed world has it under control, the “less connected” 3rd world will have our turn later on to deal with Covid in serious numbers, as we don’t have 1st world medical facilities. We can lift our hands “Nkosi Sikelel iAfrika”.)

nigeria is a ‘sick’ place anyway