Nowhere to hide: Stocks and bonds suffer losses worse than 2008 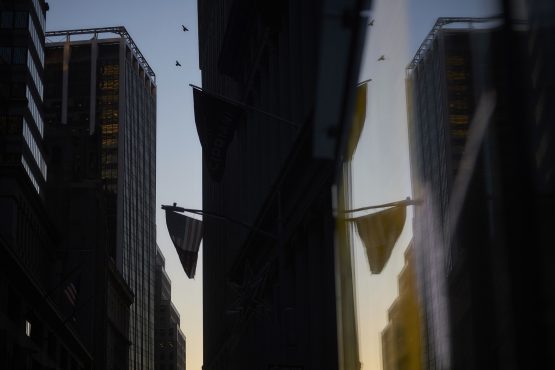 The stock market’s faithful hedge failed when investors needed it the most.

As the Dow Jones Industrial Average plunged into a bear market and the S&P 500 approached that threshold with a 4.9% drop, longer-dated Treasuries were battered too, with the yield of 30-year bonds surging to 1.39% from Monday’s record low of just under 0.70%.

That produced a combined rout of 8.6% for long-dated bonds and US equities on Wednesday, measured by adding the losses on BlackRock’s long-dated Treasury exchange-traded fund and the drop in the S&P 500 — their worst combined daily drawdown since the ETF was created in 2002. For balanced portfolios, this session was worse than any during the financial crisis. 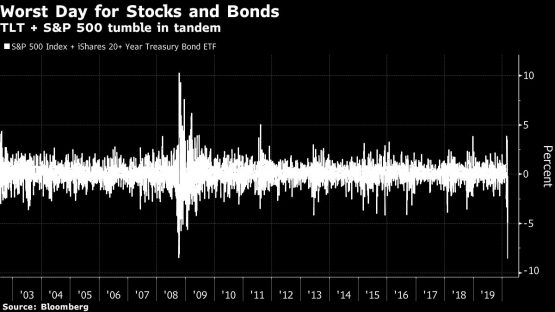 Despite the rout in stocks, the haven bid in Treasuries gave way to a rush of selling, with traders scrambling to unload their most easily traded assets — even the safest ones. The sell-off came as a shock in a market that’s been setting fresh record low yields in recent weeks.

The dual declines could indicate deleveraging among risk parity funds could be at hand, as well as the use of bonds as a source of liquidity for margin calls and redemptions.

“There was the hope that maybe if yields found some traction, the stock market would too, but now we’ve diverged again,” said Liz Ann Sonders, chief investment strategist at Charles Schwab. “Some of that may be when there’s forced selling. You sell what you can or sell where there’s profits. People had a heck of a lot of profits from Treasuries.”

The picture is just as bleak when it comes to inflation-protected bonds, with the $22 billion iShares TIPS Bond ETF down 2.3%, extending a three-day plunge to 7%.

Since December 2003, there have only been five occasions in which the S&P 500 fell at least 4.5% and this inflation-protected bond fund declined by at least 0.5%. They were: Monday and Wednesday of this week as well as three days in 2008 — October 7, October 9 and November 20.

“This is a reflection of the panic/dislocation in nominal US Treasuries,” said Mark Dow, founder of Dow Global Advisors. “Less liquid markets like TIPs and munis lag much more than usual when this happens.”

There is no place to hide – we are now all increasingly looking into the face of financial Armageddon, which is busy splitting over into every conceivable part of life – with or without your offshore investments!

On November 18, 2019, Magnus Heystek wrote on Biznews – RSA Titanic is in Groot k#k – don’t let those patriotic swimsuits fool you – we will soon be singing the blues.
On ‘’singing the Blues’’ – you were right for all the – he even got personal on a piece he raid by one certain Dr Roelof Botha on Netwerk24 last week where he was raving about the fact that Moody’s didn’t downgrade SA, omitting to mention that it was always the outlook that was in question, not the ratings itself.
There are also pensioners, like myself, in which investment funds have reached their ‘’sell-by date’’ and are locked into living annuities, etc that are also ‘’shouting the odds’’ daily, but…
Yes we all know that Pension funds, which are restricted by regulation and foreign exchange rules to have no more than 30% ( it used to be much lower in our heyday) invested offshore, have been losing ground to inflation over periods now ranging from 1 to 7 years. I am finding it harder and harder to find pension/retirement funds that have matched or beaten the inflation rate over these periods.
…but, what does Magnus Hesstek today have to say about all his 30% fancy offshore investments (the USD/ZAR will correct much sooner than the stock markets, etc), that he punted so much and tried to convince everybody that it was the ‘’be-all and end-all’’ of investments options open to locals!
He also says that ‘’ So far this year the US markets are up by between 24 and 28% in US dollar terms, Europe to is also up 25% while the JSE is the second worse performing major market with a return of 6,3%, marginally heading of the Hong Kong market which has been battered by ongoing riots for past 12 weeks.
Compare the performance of the JSE, whether in rands or preferably in USD, and it’s clear that the JSE has become something of a financial wasteland.
Answer Magnus – and so has the US, China, and the entire Euroland. The boom went on for too long although it was greatly increasing a lot of people’s ‘’paper’’ wealth – at a time that we as the locals that decided to keep our investments in sunny SA had a plethora of issues to deal with – we continued to wrestle with big questions like productivity, price stability, inflation, interest rates, affirmative action, BEE, and other issues what people had come to call overseas investments, emigration, etc. Nincompoops like me looked for other ways to deal with the risk of the bubble – and also inadvertently the coronavirus pandemic that was preceded by the 1720 plague, 1820 cholera outbreak, 1920 Spanish Flu, and the 2020 Chinese Corona Virus.