Oil declined on concerns that a coronavirus outbreak in Asia could spread and curtail demand in a market that’s already contending with plentiful supplies.

Futures slipped 1.2% to trade below $58 a barrel in New York. Goldman Sachs Group Inc. said prices could fall about $3 a barrel if an outbreak plays out in the same way as the SARS epidemic in 2003. Prices have so far shown only a limited response to the halt of exports from OPEC member Libya, as US inventories are forecast to expand from already-comfortable levels.

Read: How airlines and airports are dealing with deadly China virus 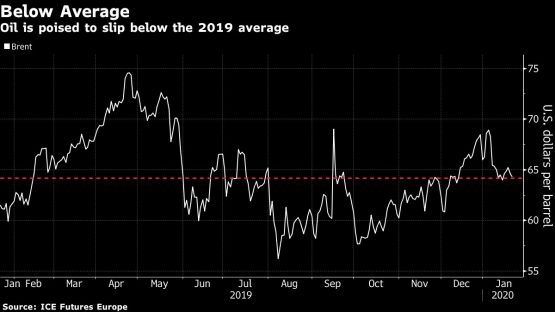 “After the demand optimism we saw regained at the end of last year, we believe that much more aggressive demand worries are about to enter the market, at least in the short term,” said Helge Andre Martinsen, senior oil market analyst at DNB Bank ASA.

Oil prices are lower than at the end of last year as crises threatening supplies in OPEC nations Libya, Iran and Iraq — as well as the signing of a preliminary trade deal between the US and China — fail to provide lasting support. With the US shale-oil boom continuing, and being supplemented by offshore projects from the North Sea to Guyana, the world is “awash with oil,” according to the International Energy Agency.

Oil demand may be curbed by 260 000 barrels a day on average if the outbreak spreads, Goldman said in a note, referencing the SARS impact in 2003 and translating that into a 2020 scenario. The peak travel season around Chinese New Year — which officially begins on Jan. 25 — “is a tremendous challenge, which could complicate the disease diffusion,” according to UBS Group.

Economists warned that China’s fragile economic stabilisation could be at risk if authorities fail to contain the new virus sweeping across Asia.

Commenting on the 2003 SARS outbreak, economist Howie Lee of Oversea-Chinese Banking Corp. said “airports were empty, hotel occupancy fell drastically and it had an impact on the economy.”