Oil declined during a volatile session as traders weighed the possibility an Iranian nuclear deal may be imminent, while tracking tensions over Ukraine that swung financial assets from gold to currencies.

West Texas Intermediate traded above $92 a barrel after losing more than 3% earlier in the session. Iran’s top negotiator, Ali Bagheri Kani, tweeted that efforts to restore the deal are “closer than ever” to agreement, although the US State Department was more circumspect. Tehran appears to be taking steps in Asia for its official return to the market, with officials from state-owned National Iranian Oil Co. meeting South Korean refiners.

Crude pared losses following a report from Russian news agency RIA Novosti that Moscow-backed separatists claimed that Ukrainian forces had violated cease-fire rules overnight. While Russia has insisted that it’s serious about easing tensions, and denies that it plans an invasion of its smaller neighbor, the US says Moscow is still building up troop levels near the border.

The Ukraine crisis is a “perfect recipe for high volatility,” said Vandana Hari, founder of Vanda Insights in Singapore. “The quantum of risk premium now stacked in crude guarantees sharp knee-jerk sell-offs on signs of a de-escalation and equally panicky buy-backs if tensions return.” 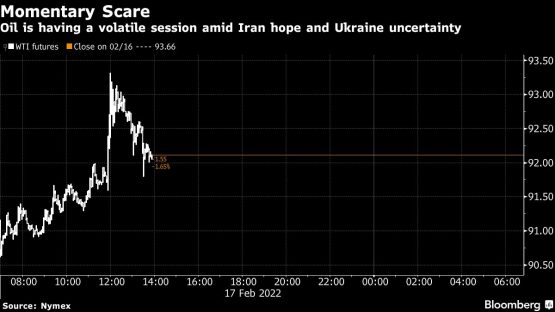 Crude rallied to the highest since 2014 earlier this week as demand picked up and the Ukraine crisis added a risk premium. Should a deal with Iran be concluded, it could lead to a resumption of sanctions-free exports, augmenting global supplies. Still, obstacles to an agreement remain substantial, with major differences on what’s required to roll back Iranian nuclear advances.

The reintroduction of sanctions-free Iranian shipments, as well as clearing crude that Tehran has stockpiled, would cool a market that’s been transfixed by the possibility futures could hit $100 a barrel. Still, Brent’s prompt spread — the difference between its two nearest contracts and one gauge of tightness — was $2.37 a barrel in backwardation, up from $2.32 at Wednesday’s close.

The hurdles that remain before a Iranian nuclear deal can be concluded were also highlighted in Bagheri Kani’s tweet. “Nothing is agreed until everything is agreed, though,” he said. “Our negotiating partners need to be realistic, avoid intransigence and heed lessons of past 4yrs.”

The focus for Iran developments is poised to shift from Vienna — where talks have been taking place — to a key transatlantic security meeting that will convene in Munich this weekend. Organisers of the conference say that the prospects for an agreement with Iran are on the agenda.

“Positive developments in the US-Iran nuclear negotiations are helping to calm oil prices,” Rystad Energy AS Senior Vice President Claudio Galimberti said in a note. “Although not a done deal yet, prices are sliding on news of progress and broad consensus in the talks as it could ultimately see up to 900b000 barrels a day of crude added to the market by December this year.”

There have been further signs this week that oil demand is outpacing supply. On Wednesday, US data showed inventories at the key Cushing hub sank to the lowest since 2018. Dated Brent, the price of cargoes bought and sold in the North Sea, reached $100.80 a barrel for the first time since 2014.

Energy consumption is being fired up as economies power back from the impact of the pandemic. Europe is leaving anti-virus curbs behind, with Germany and Greece poised to become the latest in the region to unwind regulations.