Oil rose in Asian trading on Friday — but was still headed for a third weekly decline in four — amid signs fresh supply might be hitting the market as the demand outlook worsens.

Futures in New York edged higher toward $41 a barrel after closing up 1% on Thursday. Crude had tracked Wall Street higher on news that House Speaker Nancy Pelosi and Treasury Secretary Steven Mnuchin were open to resuming stimulus talks, although stocks later pared gains as investors dialed back optimism on the prospects for a compromise.

Futures for November are down around 2% this week as the re-imposition of lockdown measures in countries including France and the UK casts doubt on the energy demand recovery. Oil traders, meanwhile, are reporting a sharp increase in Iraqi export cargoes for next month, and say they probably indicate higher overall output from the OPEC’s biggest producer after Saudi Arabia. 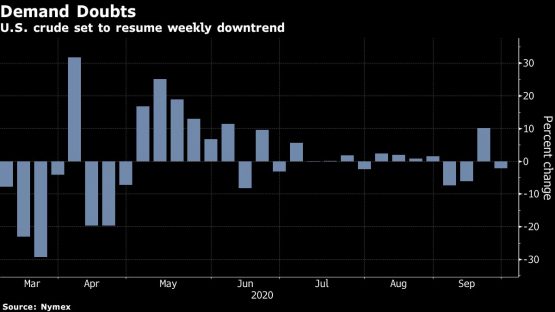 The possibility of more Iraqi barrels is coinciding with a resumption of exports from Libya as its civil war abates. A breakdown of the OPEC+ agreement to restrict production is the biggest downside risk to prices, Standard Chartered Plc analyst Emily Ashford said at a Bloomberg event, while the International Energy Agency said it was more likely to downgrade its oil demand forecasts than lift them in its next report.

“Bearish influences due to an increase in supplies from Iraq and Libya and resurgence of the virus in Europe outstripped the support from draws in US stockpiles this week,” said Vandana Hari, founder of Vanda Insights in Singapore. “Crude will continue to mirror sentiment in the broader financial markets.”

Brent’s three-month timespread was $1.36 a barrel in contango — where prompt contracts are cheaper than later-dated ones — compared with $1.31 a week earlier. The change in the market structure indicates that while there’s still concern about over-supply, it hasn’t increased markedly this week.

OPEC has allowed Baghdad to pump more crude next month by giving it more time to make up for breaching its quota earlier in the year. But the puzzle for the market is whether the increase in cargoes means Iraq could exceed its new limit of 3.6 million barrels a day. The country is sending “mixed messages of adhering to the OPEC+ agreement” as it allows for higher exports, according to oil-market researcher General Index Ltd.

In free market system you produce to the capacity of your resources. If there’s no market for your product, tough luck. Should Iraq or Iran or Libya wish to flood markets and kill competition it’s capitalist economics – unlikely to be sanctioned by U.S .