West Texas Intermediate added 1.6%, tipping it into a weekly gain. Libya’s oil exports have fallen to about a third of last year’s level after the worsening political crisis prompted the suspension of shipments from two of the nation’s biggest ports.

Risk of weaker fuel exports is also emerging in India after the government on Friday increased levies on shipments of gasoline and diesel as part of a drive to control a fast-widening currency deficit. India is a major supplier to world markets, and a drop in sales could further tighten markets that have been reeling from reduced Russian supplies. 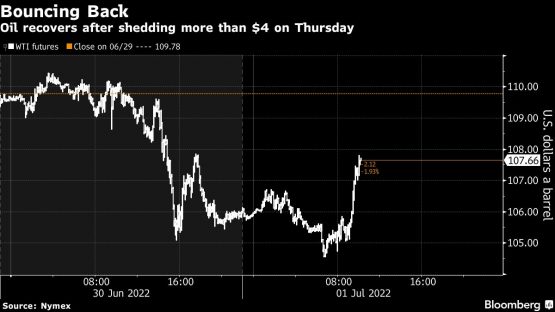 The strong close to the week comes after a spell of weakness as investors fretted over a potential global slowdown. Prices dropped 8% in June, breaking a run of monthly increases going back to December as Russia’s war in Ukraine, interruptions to supplies and rising demand drove the market higher. Oil has increased enough to alarm US President Joe Biden, who’s pushing for cheaper gasoline at home while spearheading efforts to get producers in the Middle East to boost crude output.

Still, the market for real crude barrels remains firm. Premiums for North Sea oil remains strong, while crude from Angola is selling fast as European refiners buy more cargoes with supply drying up from some of the continent’s biggest supplies. The scarce supply is highlighted in crude’s futures curve remaining backwardated, where near-term contracts are more expensive than those for later delivery.

Traders will be scrutinizing the next moves by the Organization of Petroleum Exporting Countries and its allies. While the group this week ratified an oil-production increase in August, completing the return of supplies halted during the pandemic, it left the more pressing issue of future output levels unresolved. Biden will travel to the Middle East later this month to urge Saudi Arabia and the United Arab Emirates to increase supplies further.

Meanwhile, US demand remains robust for now as a record number of drivers are expected to hit the road this weekend for Independence Day travel, buttressing gasoline consumption. Average retail pump prices have eased slightly in recent weeks after hitting a record above $5 a gallon in June.