Futures in New York rose around 1% toward $40 a barrel. Chinese crude imports climbed 2.1% in September from August, the General Administration of Customs said Tuesday, in a positive sign for global demand. Buying was resilient against expectations for a slowdown and volumes are likely to stay high through to the end of the year, Australia & New Zealand Banking Group Ltd. said in a note.

Crude dropped 2.9% Monday as several supply disruptions that have supported prices subsided. Libya’s largest oil field could be at full capacity by next week, while Royal Dutch Shell Plc, BHP Group and Chevron Corp. said they’ve begun resuming operations at Gulf of Mexico platforms after Hurricane Delta. That followed the cancellation of an oil workers strike in Norway on Friday. 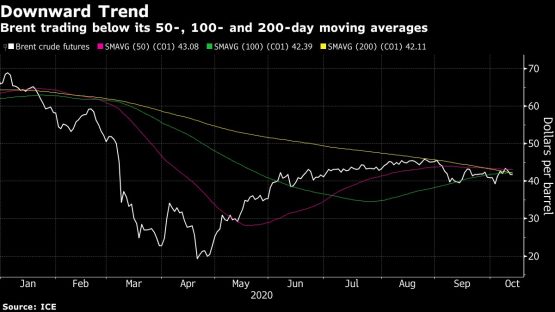 The returning supply is hitting a market where a resurgent coronavirus has stalled the demand recovery. The UK is tightening restrictions as infections rise, while Italy and the Netherlands are also considering new measures. After an unprecedented 8% drop this year, global oil consumption won’t return to pre-virus levels in 2023, provided Covid-19 is brought under control next year, the International Energy Agency said.

“With the US Gulf and North Sea supply crimps of last week fading away, crude is once again being weighed down by weak fundamentals,” said Vandana Hari, founder of Vanda Insights in Singapore. “Although the Libyan supply resumption is gradual and could even hit roadblocks again, it’s exerting psychological pressure.”

Brent’s prompt timespread was 48 cents a barrel in contango, where prompt prices are cheaper than later-dated ones. The contango in the benchmark has hovered around 50 cents this month, indicating that while there’s still some concern about over-supply investors aren’t anticipating a glut.

In the latest sign of refiners struggling to cope with tepid consumption, Italy’s Sarroch refinery in Sardinia — one of Europe’s biggest and most complex — will effectively operate at the minimum required rate. That came after Cepsa idled part of a facility in southern Spain, highlighting weakness in the jet fuel market in particular.

Investors are increasingly focusing on how the US election next month is likely to affect oil. A Democratic sweep of the White House and Congress could lead to an increase of Iranian production by 500,000 barrels a day by the third quarter of 2021, JPMorgan Chase & Co. said in a note. However, that would likely be offset by rising demand, and crude prices could rise by 10% to 15% in the month after the election on fiscal stimulus and dollar weakness.