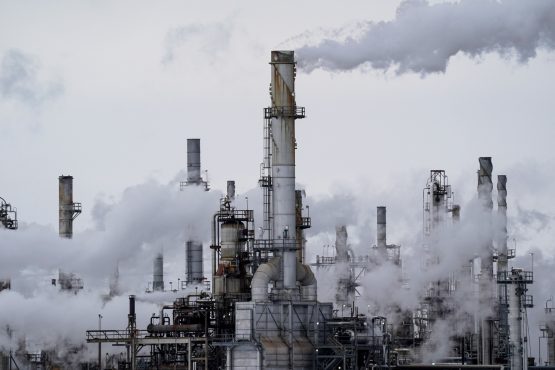 Oil soared as energy and commodity markets were thrown into a state of disarray after Western nations unleashed more sanctions to isolate Russia following its invasion of Ukraine.

Futures in London jumped more than 7% before giving up some gains to trade near $103 a barrel. Oil supply was already struggling to meet the demand recovery from the reopening of economies, and any disruptions to flows from the world’s No. 3 producer could sharply exacerbate the tightness. China and other buyers have paused purchases of Russia’s flagship Urals grade, while some Asian customers are frantically trying to secure more Middle East crude.

Western nations agreed over the weekend to exclude some Russian lenders from the SWIFT bank messaging system and targeted the central bank’s foreign reserves. BP Plc also moved to dump its shares in oil giant Rosneft PJSC, taking a financial hit of as much as $25 billion. Russia’s invasion of Ukraine has roiled markets from energy to metals and grains, heaping more inflationary pressure on a global economy already hit with surging costs. At least two of China’s largest state-owned banks are restricting financing for purchases of Russian commodities, underscoring the limits of Beijing’s pledge to maintain economic ties with one of its most important strategic partners in the face of Western sanctions.

Against this volatile and fast-moving backdrop, OPEC+ faces a trickier task than usual when it meets on Wednesday to discuss its supply policy for April. Despite the invasion, the cartel will probably stick to its plan of gradually increasing oil production, according to delegates. The group will also have to take into account the halt of some Iraqi output.

“Removing some Russian banks from SWIFT could result in a disruption of oil supplies as buyers and sellers try to figure out how to navigate the new rules,” Andy Lipow, president of Lipow Oil Associates in Houston, said in a note.

Demand destruction is the only thing that can stop oil shooting higher after additional curbs were unleashed on Russia, according to Goldman Sachs Group Inc. The bank raised its one-month forecast for Brent to $115 a barrel, from $95, with significant upside risks on further escalation or longer disruption.

Brent is still deep in a bullish backwardation structure, despite easing slightly from Friday, highlighting investor nervousness over the supply tightness. The global benchmark’s prompt spread was $3.35 a barrel in backwardation, compared with $1.39 at the start of the month.

“The surge that we’re seeing today was guaranteed, given the considerable deterioration of the Ukraine situation over the weekend,” said Vandana Hari, founder of Vanda Insights. “Markets should brace for plenty of aftershocks.”

The surprise move by BP is the latest sign of how far the West is willing to go to punish President Vladimir Putin for the invasion. The oil major has been in Russia for three decades and was staunchly defending its presence there just weeks ago. Norway’s Equinor ASA also said it will stop new investments into its Russian business and start the process of exiting joint ventures.

Societe Generale SA and Credit Suisse Group AG stopped financing commodities trading from Russia, according to people familiar with the matter. The two banks, key financiers to commodity trading houses, are no longer providing the money needed to move raw materials such as metals and oil from Russia.

The UK would support Group of Seven nations setting limits on the amount of Russian oil and gas its members could import “over time,” Foreign Secretary Liz Truss told Sky News on Sunday. Russia’s military “is funded by revenues from oil and gas,” so we want to cut its dependency on them, Truss said.

The price of Brent Crude is still 18.5% lower than the 20-year average price in terms of a constant currency, namely gold. Converted to rand that implies that the price can rise to R25 per liter before it matches the average, inflation-adjusted, price of the last 20 years.

Oil is cheap, relative to what lies ahead.