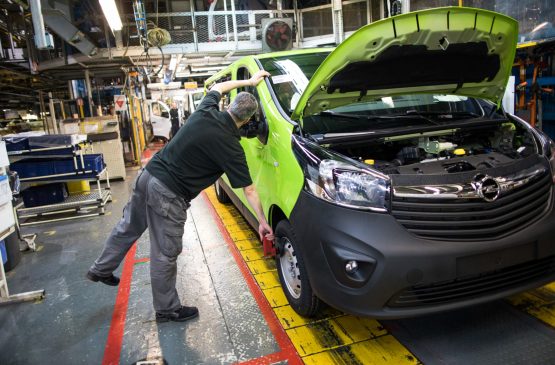 An employee checks the front wheel of a Vauxhall Vivaro medium sized van on the final assembly line at the Vauxhall plant in Luton, UK, Image: Chris Ratcliffe/Bloomberg

PSA Group’s German car-making division Opel will cut up to 2 100 jobs at three locations as the automaker joins rivals around the globe in retrenching amid a sales slowdown and technological disruption.

Opel will reopen a voluntary leave program for employees at the company’s Rüsselsheim, Eisenach and Kaiserslautern locations, eliminating the positions by 2025, the company said in a statement Tuesday.

“This agreement creates a further considerable improvement of our competitiveness,” Opel Chief Executive Officer Michael Lohscheller said in the statement. The company will also invest more money into the Rüsselsheim plant.

While PSA breathed life into Opel after acquiring it from General Motors in 2017, German brands have been struggling to prove they’re ready to meet stricter emissions standards, which are almost impossible to meet without electric cars. Transitioning from the internal combustion engine that Germany invented could be taxing for its economy because plug-in cars require fewer parts and less labor to build.

Carmakers are eliminating more than 80 000 jobs during the coming years, according to data Bloomberg News compiled in December. PSA announced plans late last year to merge with Italian-American automaker Fiat Chrysler Automobiles NV and has said no plants will close as a result of the deal.