Palm oil is one of the most versatile staples, used in thousands of products from food to personal care items and biofuels.
By Bloomberg News 26 Apr 2022  09:09 Palm oil rebounded as traders assessed the severity of Indonesia’s ban on cooking oil exports that sparked wild swings in the market.

Fears of a complete ban eased as Indonesia said it will only halt exports of RBD palm olein, a product that has been processed, while shipments of crude palm oil can continue. The move has threatened to tighten global vegetable oil supplies at a time of soaring food inflation fuelled by the war in Ukraine.

Palm oil is one of the most versatile staples, used in thousands of products from food to personal care items and biofuels. The move could increase costs for packaged food producers such as Nestle SA, Mondelez International and Unilever, hitting products like biscuits, noodles, cakes and ice cream. It might also increase inflation risks for top importers like India and China. 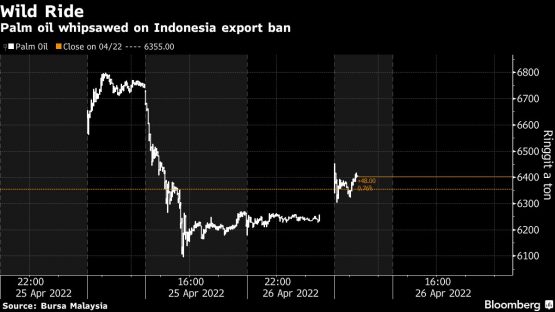 “Supply will be tight until at least the year-end as top producer Indonesia implements moves to secure its own domestic supply,” said Rajesh Modi, a trader at Sprint Exim Pte in Singapore. “Any correction in the market will be a prompt to buy.”

Indonesia imposed the ban just as the country that’s home to the world’s largest Muslim population heads into the Eid al-Fitr holiday. The local shortage of edible oil has led to street protests and become a key political issue for President Joko Widodo on concern it will push up other food prices as well.

In other crops, wheat advanced as much as 2.4% in Chicago amid worries that rains in the northern US Plains could delay spring planting. Big harvests in North America are needed this year after Russia’s invasion of Ukraine temporarily shut off shipments out of the Black Sea, where about a quarter of wheat exports reach the global market. Corn and soybeans also rose Tuesday.