Sending an industry gauge up by the most in a week amid investor hopes for more policy easing.
By Shen Hong, Bloomberg 19 Nov 2021  09:24 Chinese property stocks posted sudden gains on Friday afternoon in Hong Kong, sending an industry gauge up by the most in a week amid investor hopes for more policy easing.

A Bloomberg index of real estate firms listed in Hong Kong and mainland China climbed as much as 4.7%, partly fueled by an 8.3% surge in China Evergrande Group. Country Garden Services Holdings Co., which tumbled as much as 17% earlier Friday following its announcement of a $1 billion share placement, narrowed its losses to 8.5%.

Earlier, several Chinese cities reportedly eased rules for land sales amid waning interest among cash-strapped developers. It was the latest sign of growing pressures on local governments as a housing market slowdown intensifies. 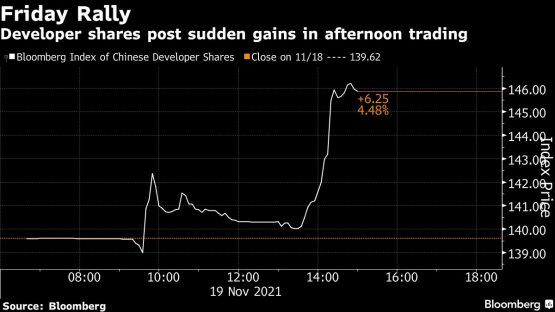 A Bloomberg Intelligence gauge of Chinese property developers soared as much as 4.7%, the most in a week, with China Evergrande Group advancing as much as 8.3%. The index, which measures stocks listed on both the mainland and in Hong Kong, was headed for its first gain in three days.

Agile Group Holdings Ltd. has remitted funds for the repayment of a HK$3.34 billion ($429 million) loan and a $60 million loan that are both due on Nov. 22, according to a Hong Kong stock exchange filing.

Evergrande’s main onshore property development subsidiary said it has resumed construction at 63 home projects in Guangzhou, Foshan, and some other cities in the southern Guangdong province, according to a company statement. The unit reiterated a pledge to deliver quality apartments.

Several large cities including Shanghai and Nanjing have announced details of land sales plans in December, offering more plots than those in the last round, the official Securities Times reported. Some eased transaction requirements for developers, such as by reducing deposits ahead of bidding or refraining from asking for full payment within a month, the newspaper reported.

Country Garden Services slumped as much as 17% in Hong Kong trade, a day after it said it is looking to raise HK$8 billion ($1.03 billion) through a share sale, the latest Chinese real estate firm to tap equity markets amid a liquidity crunch engulfing the sector. Its shares were trading around the HK$51 level late morning, after the company confirmed placement pricing at HK$53.35 per share Thursday.

Zhongliang Holdings Group Co. said it has remitted funds to the trustee for repayment of the outstanding principal amount and accrued interest of a dollar bond due this month, according to a Hong Kong stock exchange filing.

China Evergrande Group is offering to pay outstanding commission fees owed on two flats for every additional one of similar value that agents sell at one of its Hong Kong projects, the South China Morning Post reported, citing notes from one of a series of meetings between the developer and property agencies.

Evergrande attributed the payment delay to its cash flow problems, saying that the project’s financing structure also “made it impossible to take a large amount of funds to pay commissions.”

A unit of Yango Group Co. announced that bondholders approved its offer to exchange three of its dollar bonds, according to a Thursday filing to the Hong Kong stock exchange.

The developer will issue $669.9 million of new notes due in September to replace the existing three bonds. Yango Justice International Ltd. proposed the debt swap on November 1 after seeing “enormous pressure” on short-term liquidity, saying then that if support fell short the company “may not be able to repay” existing notes.