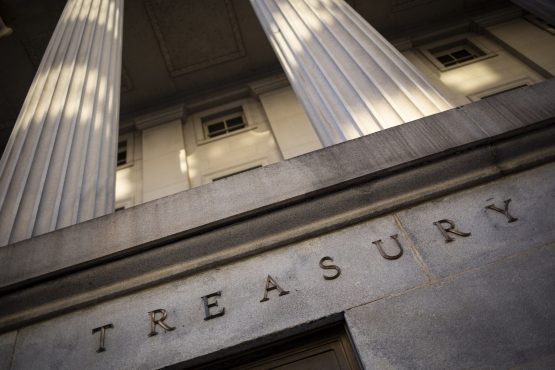 The US Treasury building in Washington, D.C. Image: Al Drago, Bloomberg
It’s getting more expensive to protect against the possibility of a U.S. government default, with less than two weeks until Treasury Secretary Janet Yellen says the nation will hit its debt ceiling.

As the partisan impasse in Congress drags on, investor anxiety is mounting that lawmakers could fail to raise the debt limit in time. There’s a growing risk premium in Treasury bills maturing around the end of October.

And in the market for credit-default swaps, the cost to insure against a U.S. default over the next year has risen to 27 basis points, from 4 basis points in mid-September. It’s now the most expensive since 2015, when the government was staring down another debt-limit deadline. “The market doesn’t care until it does,” said Ira Jersey, chief interest-rate strategist at Bloomberg Intelligence. “T-bills started to worry in early September, but now some market participants are starting to hedge for a delayed payment via credit-default swaps on the U.S. — the longer it drags, on the wider CDS spreads could get.”

Judging by CDS levels, at least, investors still see the risk as relatively muted compared to debt-limit episodes in 2013 and in 2011, when S&P Global Ratings downgraded the U.S. from AAA. The one-year CDS level means it costs about 27,000 euros ($31,000) to insure 10 million euros worth of Treasuries against default during that period.

While Yellen pointed to Oct. 18 as the so-called x-date on the debt limit, the Bipartisan Policy Center, a Washington research firm, now sees the department exhausting its extraordinary measures to avert breaching the ceiling between Oct. 19 and Nov. 2.

Some Wall Street strategists say financial markets are looking too sanguine over the showdown, and warn of the risk of turmoil ahead.

Senate Majority Leader Chuck Schumer plans Wednesday to seek a vote on whether to take up a measure approved by the House that would suspend the debt ceiling until December 2022. Senate Minority Leader Mitch McConnell said both parties could reach a deal on scheduling to allow the debt ceiling to be raised with just Democratic votes well before the Treasury’s deadline to act.

Fitch Ratings said last week that delayed or defaulted payments by the Treasury, even on items other than Treasury securities, “would likely undermine the U.S.’s ‘AAA’ status.”