The president has ‘favourably disposed’ the proposal.
By Alexander Winning, Reuters 5 Feb 2020  11:46

South African President Cyril Ramaphosa is “favourably disposed” to a proposal by the country’s largest trade union federation to use funds from a state-owned asset manager to reduce the debt of beleaguered utility Eskom, his spokeswoman said on Wednesday.

Union federation Cosatu proposed a package of rescue measures for Eskom – which struggles to meet the country’s power needs and doesn’t generate enough cash to service its debts – at a meeting with Ramaphosa and business leaders on Monday.

The cornerstone of its plan is for the Public Investment Corporation (PIC) and two local development finance groups to invest about R250 billion in Eskom via a special purpose vehicle to reduce its R450 billion debt.

International ratings agencies regularly cite Eskom as one of the biggest risks to South Africa‘s strained public finances, and Moody’s is the only major agency left that hasn’t downgraded the country’s sovereign debt rating to junk.

The root causes of Eskom’s financial woes lie partly in massive cost overruns at two huge coal plant projects, but it has also been hamstrung by mismanagement and corruption scandals under previous executives.

Business leaders agree Eskom’s debts must be drastically reduced but they are wary of interfering with the investment mandates or risk-management processes of the PIC or the other two local groups, the Development Bank of Southern Africa (DBSA) and the Industrial Development Corporation (IDC).

The PIC is one of Africa‘s largest fund managers with more than R2 trillion in assets and stakes in many of the biggest companies listed on the Johannesburg Stock Exchange.

Although state-owned, the bulk of its funds are invested on behalf of private individuals, mainly government employees.

Ramaphosa agreed at the meeting on Monday that the mandates or fiduciary duties of the PIC and other institutions should not be undermined, his spokeswoman Khusela Diko told Reuters.

The PIC said any approach for funding must be supported by a credible business case and geared towards delivering sustainable returns for its clients. It said it was already a major investor in Eskom bonds, as provided for by its investment mandates.

Government, business and labour representatives are holding further talks about the Cosatu proposal on Wednesday.

Cosatu – the Congress of South African Trade Unions – is a key ally of Ramaphosa’s governing African National Congress (ANC), so the federation’s policy proposals carry weight within government circles and the ruling party.

Cosatu’s parliamentary coordinator Matthew Parks said the aim was to agree a “social compact” on Eskom before Ramaphosa’s state of the nation address on February 13.

Parks said the debt proposal could free up money for maintenance at Eskom’s faulty coal-fired power stations. The proposal has not been formally discussed with the PIC, he said.

Among its other Eskom proposals, Cosatu wants to halt the privatisation of Eskom assets and make the utility renegotiate old renewable energy deals, which it considers punitive.

Business leaders oppose some of the suggestions.

“While business is comfortable with some of Cosatu’s conditions, others are not practical or will result in an inability to manage costs,” said Martin Kingston, executive chairman of Rothschild & Co South Africa.

“For instance, the sale of Eskom assets should not be restricted in an appropriately regulated electricity supply industry,” said Kingston, who attended Monday’s meeting.

Another contentious Cosatu proposal is for the government to introduce a requirement for pension funds to invest money in development and infrastructure projects.

The proposal to earmark funds – known as “prescribed assets” – worries analysts who fear it will cause investor panic and discourage savings.

Diko said Ramaphosa called on Monday for “a broader discussion around how financial institutions invest their money, since a relatively small portion of their funds were being directed to developmental projects”.

“COSATU wants the PIC, the Development Bank of Southern Africa (DBSA) and the Industrial Development Corporation (IDC) to invest in a special purpose vehicle that would house roughly R250 billion of Eskom’s R450 billion debt …” Investing implies you will get a return. This is not investing this is throwing money into a bottomless pit. Ultimately the over taxed public will have to pay. In addition, unless the bloated workforce is cut, corruption stemmed and operational efficiency improved, they will be back in a few years wanting another bailout.

Road of least resistance. Typical ANC – Party and Unions before country. That pot they will equally quickly empty

What does he know?

So nobody cares what he is disposed to.

This poor guy is totally out of his depth and just a union, socialist / communist puppet.

As the song goes. EVERYBODY KNOWS.

Just when you thought that there was nothing more left to steal, pillage or loot they go and pull this fluffy rabbit out of the hat. 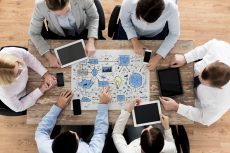