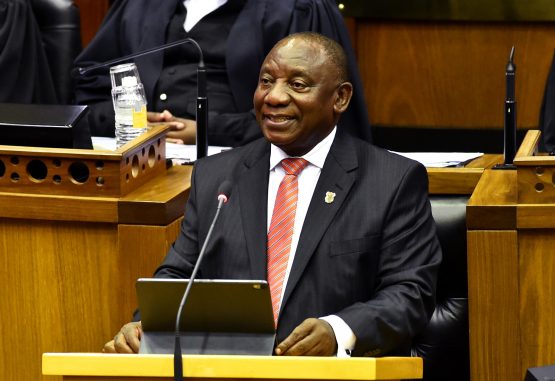 South African President Cyril Ramaphosa set a collision course with labour unions that helped bring him to power as the government proposed dramatic curbs to its wage bill to bring spiralling debt under control.

The cuts, already shot down by worker groups, may still not be enough to prevent the nation from losing its last investment-grade credit rating at Moody’s Investors Service.

Pay increases, benefits and promotions will be limited, saving R160 billion over the next three fiscal years, the National Treasury said in the budget review presented to parliament in Cape Town on Wednesday. It paints a bleak picture of power blackouts restraining economic growth in the $340 billion economy, tax revenue falling short of targets and bailouts for struggling state companies draining state coffers.

“We have to get our house in order and it’s going to be a difficult process,” Finance Minister Tito Mboweni told reporters before delivering his budget speech. “We have to sacrifice, all of us.”

The budget was cheered by the markets. The rand rose as much as 0.8% against the dollar, benchmark 2026 bond yields dropped to five-year lows and bank and retail stocks rose on the Johannesburg Stock Exchange. The government has failed in the past to persuade its 1.3 million employees to agree to limit wages, and personnel costs have surged 40% more than inflation over the past 12 years. It faces similar resistance this time, with the Congress of South African Trade Unions and the Public Servants Association warning they’ll resist any attempt to make workers bear the brunt of the nation’s economic woes.

The government needs to hold the line to avert a downgrade to junk by Moody’s that could trigger a massive outflow of funds, and to rebuild business confidence that’s near a three-decade low. Yet, Ramaphosa can ill afford to alienate Cosatu, the country’s biggest labour federation that helped him win the leadership of the ruling African National Congress in 2017 and remains one of his key backers in the deeply divided party.

“I think we will find each other,” Mboweni said. “It will take some time.”

Civil servants last staged a strike in 2010 that dragged on for three weeks before they were awarded an inflation-beating 7.5% raise.

The Treasury said raising taxes had been at the core of its efforts to stabilise government finances over the past five years, and the focus now has to shift to cutting spending and ensuring money is better used to spur growth in an economy that’s projected to expand just 0.9% this year and 1.3% in 2021. Reforms to electricity, ports and telecommunications, along with changes to government-procurement rules, will help boost output, it said.

For the first time in years, individuals will get some tax relief to help ease the burden on households. Corporates can expect lower tax rates in the medium term.

Even with a lower wage bill, the Treasury will struggle to bring the budget-deficit under control. The gap is projected to widen to 6.8% of gross domestic product in the year through March 2021 from 6.3% in this year. That will be the biggest gap since apartheid ended in 1994. The Treasury expects to collect R63.3 billion less this year than it projected a year ago, and has abandoned a target to balance the budget, excluding interest costs and support to the state power utility, by fiscal 2023.

“Was there good news for rating agencies in Budget speech 2020?” PwC economists Lullu Krugel and Christie Viljoen asked in a research note. “Yes, but not a lot. Efforts to address the public-sector wage bill will be a positive, if it is indeed implemented.”

The truth is – we will get down graded. Will it be the end of the world? No. However, what excuse will we then have to keep the unions and their wage increases at bay? 29,000 public servants earning more than R1m annually. A CA with 2 years post article experience earns R800k. CFO of medium sized company earns R1m. Newly qualified civil engineer earns R300k. Public servant as a career looks like easy money with guaranteed above inflation rate increases (whether you perform or not). Most likely no staff turnover, since no one gets fired or wants to leave for better pay.