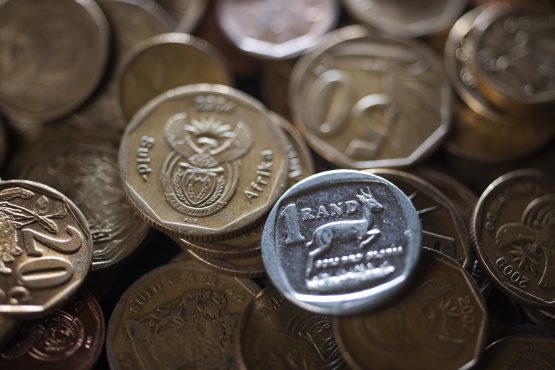 In equities, the Top-40 index was up 1.6% while the broader all-share rose by 1.3%. Image: Waldo Swiegers/Bloomberg

The rand firmed to a new six-week high on Monday as investors looked beyond an uncertain local and global backdrop and kept buying the high-yielding currency, while stocks rose, led by chemicals firm Sasol.

“The main risk event will be the Medium-term Budget Policy Statement on Wednesday,” Lukman Otunuga, senior research analyst at FXTM said in a note.

“Should the statement paint a gloomy picture of the South African economy, the rand will be in the direct firing line.”

A poll of 14 economists expects Finance Minister Tito Mboweni to expand the deficit to 6.05% of gross domestic product, up from a projection of 4.5% in February for the year that began in April, owing mainly to bailouts to state power firm Eskom.

Read: A crisis too good to waste

Crisis-hit Eskom was handed an additional R59 billion lifeline by parliament on October 22, prompting criticism from opposition parties that it was a “blank cheque” which would swell borrowing.

But the firm has not cut power to the national grid since last Sunday, when breakdowns at some its coal-fired plants forced it to throttle supply, easing investor concerns and breathing wind into the rand since the beginning of the month.

Shares in petrochemicals group Sasol were up nearly 12% after the company announced that its joint chief executives were stepping down after a review of a project in the United States dogged by delays and rising costs.

The company said Bongani Nqwababa and Stephen Cornell, the joint CEOs, who have not been found to have committed misconduct nor shown incompetence, would step down at the end of this month to restore trust in Sasol.

Suffering losses on the day was miner AngloGold Ashanti , with shares falling 7.5%, after the firm said it expected its full-year production will be at the low end of its forecast range as output fell in the third quarter from a year ago and costs rose sharply.

The yield on the benchmark government bond was down 0.5 basis points to 8.165%.