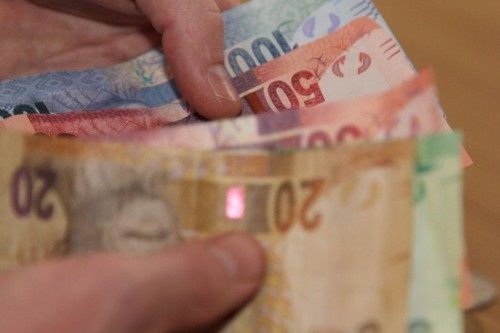 Nene was removed from his position after 19 months and ahead of his “deployment to another strategic position,” Zuma said in an e-mailed statement on Wednesday, without providing more detail. He was replaced by David Van Rooyen, who serves as a parliamentary member on committees for finance and economic transformation.

“This is a big negative, especially because Nene was seen as someone who was moving in the right direction,” Ilke van Zyl, an economist at FirstRand Ltd.’s Johannesburg-based investment banking unit, said by phone. “Because we don’t know the new man and we all have to get to know him now, and we are already at a very sensitive point in the projections of our fiscal position, we think this is a negative.”

The cabinet shakeup, the sixth since Zuma took office in May 2009, creates more uncertainty for an economy struggling to cope with plunging metal prices, credit rating downgrades and power constraints. On Dec. 4, Fitch Ratings cut the country’s credit rating to BBB-, one level above non-investment grade, while Standard and Poor’s cut the outlook on its equivalent rating to negative, bringing the nation a step closer to junk status.

“This is monumentally bad timing after a downgrade,” Peter Attard Montalto, an economist at Nomura International Plc, said from London. “This is very ratings negative and increases the risks of contingent liability shocks in the future. It is an erosion of a previously strong-standing institution.”

Stocks were up almost 1%, led by mining companies such as Sibanye Gold and AngloGold Ashanti as the gold price strengthened.

The dollar, measured against a basket currencies, was down 0.72% at 1545 GMT with commodity-linked assets gaining as the oil market sell-off abated.

Yields on government bonds edged lower, with the benchmark paper due in 2026 shedding 0.5 basis points to 8.83%..

On the bourse, bullion producer Sibanye Gold rose 9.2% to R23.49 as the spot price for the yellow metal was buoyed by a softer dollar and European shares.

Gains were capped by cautiousness ahead of an anticipated US Fed rates rise next week which is likely to dent demand for non-interest yielding gold.

Trade was robust 267 million shares changed hands on the stock market, according to preliminary bourse data, well above 183 million shares.