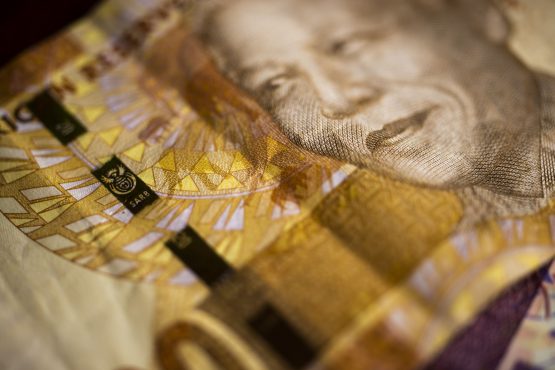 The rand firmed by more than 3% on Tuesday, in line with a broad rally in emerging market currencies and other riskier assets on hopes that steps to contain the coronavirus pandemic were having an effect in some countries.

Stocks were also significantly higher, as yield and value hungry investors kept on the sidelines during recent volatility took advantage of historically low prices to re-enter the market.

At 1300 GMT the rand was 3% firmer at R18.08 per dollar, its best level since Thursday having crossed key technical levels at R18.50 and R18.20, signalling the possibility of an extended rally with investors willing to ride out the turbulence.

“At around R19.50 the rand was very oversold. It’s fair value is closer to R15.50. Every time the rand has collapsed, which happens a lot, within a year it comes back to fair value,” said Wayne McCurrie, portfolio manager at FNB.

The currency extended a rally from the previous session with modest risk appetite, spurred by an apparent slowing in the rate of new COVID-19 cases in the United States and some European countries, attracting investors looking to pocket the currency’s high returns, or carry yield.

The currency has also managed to weather a policy storm building around a likely bailout from the International Monetary Fund (IMF). “The main reason countries go to the IMF is a balance of payments crisis. But we have very little external, foreign currency debt. So there’s no need to go the IMF cap-in-hand. We’re a long way from that,” McCurrie said.

Bonds firmed, with the yield on benchmark paper down around 0.5%.

Focus was on banks and financial firms after the central bank late on Monday advised banks not to distribute dividends and put bonuses for senior executives on hold.

The bank index fell in early trade before soaring 10%, with some traders seeing the cap on payouts, which would typically turn off buyers, as opportunity to buy highly valued bank shares on the cheap.

The National Treasury is considering creating a scheme to encourage bank lending to small businesses and consumers as one response to the coronavirus outbreak, central bank deputy governor Kuben Naidoo told Reuters.

May I ask Mr McCurrie to explain the calculation(s) behind the ‘fair value’ of the rand?

Suddenly every trader is a epidemiological expert. The numbers is SA are just not believable.

You make a good point @Africa Pragmatist. There is something really strange about the SA Covid-19 numbers. Either we have one of the highest Covid-19 immunity levels in the world due to something such as decades long mandatory TB vaccination with BCG or the datasets are just plain wrong. Just take 13 tragic local deaths out of 1749 official infected individuals and compare that to figures in Argentina (similar seasons and weather) that has a comparable medical system and announced their first infection at about the same time that we did. Why are they, with 1628 official infections, at 56 deaths and we are at 13? If you rule out weather and hospital treatment as factors then it makes no sense. Our HIV and TB incidence is way higher than theirs. We have greater poverty – their GDP per capita is more than double that of ours. I wish the local media would start picking up on this more! Are people dying undiagnosed in large numbers like in Italy (thanks for the links @MichaelfromKlerksdorp) or has South Africa been given one of its most valuable hall passes ever?