‘I think EMs are going to be in a very tough spot going forward,’ said Reinhart.
Michelle Jamrisko and Netty Ismail, Bloomberg 29 Jun 2020  07:33 A disconnect is growing in emerging markets, which have rarely faced such dire economic conditions and yet whose assets are about to round out their best quarter in a decade.

The MSCI Emerging Markets Index as well as dollar bonds are on track to post their biggest quarterly gains since the 2009 recovery from the global financial crisis. The tidal wave of central-bank stimulus sweeping the world has supported risk appetite.

Emerging-market currencies are up about 2% in the past three months, with the Indonesian rupiah, Russian ruble and Colombian peso leading gains. Capital flows are showing a “modest return” after outflows in early 2020 dwarfed those of prior crises, according to a June 24 report from Institute of International Finance.

All of that is at odds with the downbeat outlook, especially for Latin American, South Asian and African economies, where virus outbreaks risk spiraling out of control. The IMF’s latest projections show that while China could eke out growth this year, Mexico, Argentina, Brazil, and South Africa have each been marked down to a contraction of 8% or greater. 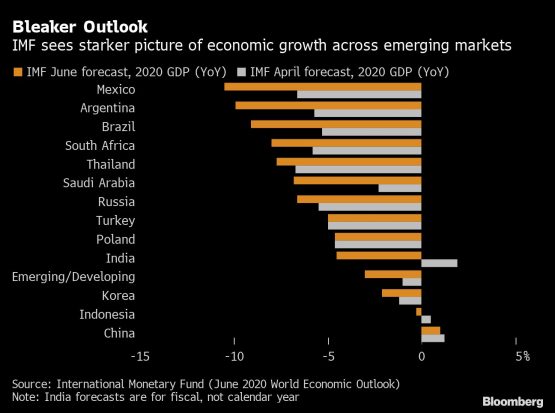 The yawning divide between market gains and economic gloom risks a snapback in the months ahead that would add to recovery headwinds.

“While the ample liquidity and the low-rate environment continues to provide EMs with the lure of high coupons, as the recovery process gets delayed, I think the risk considerations are worsening for emerging markets as a class,” Carmen Reinhart, the World Bank’s chief economist, said at last week’s Bloomberg Invest Global conference.

The World Bank is predicting emerging and developing nations as a group will shrink 2.5% — their worst performance in data that starts in 1960. The economic pain could catch some more bullish investors wrong-footed.

“I expect a day of reckoning is coming where foreign investors will conclude that they are not getting compensated for the risks in EM countries,” said Rob Subbaraman, global head of macro research at Nomura Holdings Inc. in Singapore.

“For emerging markets, the virus recession starts with a pandemic most are ill-equipped to deal with, then layers on the worst elements of the 2008 global demand shock, the 2014 collapse in commodity prices, and the 2018 capital flight episode.”

Daoud estimates that even a best-case scenario will mean losses that equate to the size of Turkey’s economy, and that would require a lot to go right: “the virus receding, a recovery in advanced economies boosting exports, financial flows and commodity demand, and sizable EM stimulus.”

Central banks in the emerging-market world have joined their developed peers in slashing interest rates and Bloomberg Economics counts 13 as of late April that have implemented or are considering buying government bonds. More experiments with unconventional measures risk spurring capital outflows.

It’s not uniformly disastrous for emerging markets. Jim O’Neill, chair of Chatham House, is downbeat on Latin America and India, but he told Bloomberg Television that he sees a chance “this crisis might accelerate this century of Asian dominance” as China and other economies in the region prove adept at managing the pandemic.

Edwin Gutierrez, the London-based head of emerging-market sovereign debt at Aberdeen Asset Management, said he sees the “low-lying fruit” as already picked. He now sees a real risk that some countries in South Asia and Latin America will have to pause lockdown relaxations.

Spreads on emerging-market bonds are unlikely to return to the levels seen in January, with the economies of Brazil, Mexico and Peru likely to be among the hardest hit by the virus, said Todd Schubert, Singapore-based head of fixed-income research at Bank of Singapore Ltd.

“We would compare the incipient rally in emerging-market spreads to a teenager with a new sports car,” Schubert said. “You know the power and potential are there but you are wary of the dangers as well.”

Emerging-market assets might still have a “good” second half of 2020, though it’ll be hard to repeat the gains thus far, said Eric Stein, Boston-based co-director of global fixed income at Eaton Vance Corp., which manages about $465 billion. Stein flagged countries like Brazil as highly risky given that further monetary policy easing could mean “disorderly” outflows.

Emerging markets that have poured on the fiscal stimulus — now around $11 trillion for all governments globally, the IMF estimates — have less room to spend without triggering concerns over unmanageable debt. And many of their central banks are at record-low interest rates already and therefore have less room to act if their economies continue to crater.

“I think EMs are going to be in a very tough spot going forward,” said Reinhart.

When the dollar moves weaker against the Dollar Index, the real price of commodities will increase, leading to a rise in profit margins for commodity producers. The “run on the dollar” creates a crisis for emerging markets that are running out of money.

The Fed is trying to rectify this situation, but all their efforts are not enough to bring back trust and a return of the risk appetite. Record-low interest rates in developed markets are causing deflation and economic contraction in emerging markets. Emerging Markets are drowning in the debt of developed markets, so to speak. A weaker dollar, the life-vest of inflation, is the only hope.