Image: Andrea Verdelli/Bloomberg
A record-breaking number of emerging-market companies made their public debuts in 2021, just ahead of what should be a tough year for equity investors.

While the price of most newly issued stocks has risen since their IPOs, the benchmark gauge of developing-economy stocks just wrapped up its worst year since 2018. That suggests appetite for the risk assets is dwindling, with quick-spreading virus variants and higher interest rates set to further challenge equities in coming months.

Those headwinds were far from investors’ minds as higher capital needs and hope for a global economic recovery led 1,162 companies from emerging markets to make initial public offerings last year on local or foreign exchanges. All together, they raised $228 billion via listings, about a 31% increase from 2020, according to data compiled by Bloomberg.

“Last year, especially in the first half, we saw a boom of tech-related IPOs across EM,” said Ignacio Arnau, a Madrid-based investor at Bestinver Asset Management, which has about $8 billion under management. “There was both fundamental and scarcity value factors driving the appetite in the market.” 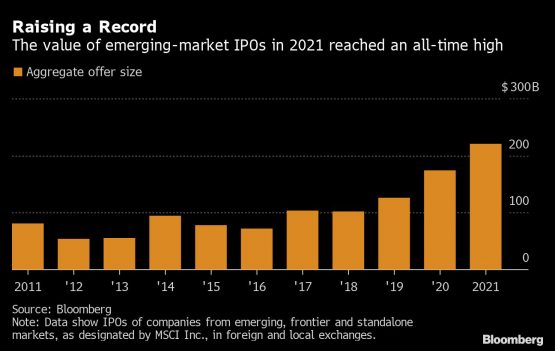 The rush of new listings may have satiated some market demand, especially in the tech sector, said Arnau, who sees fewer small deals making the cut this year, regardless of their quality.

“There are plenty of high-quality companies out there with proven concepts, profitable business models and great track records trading at very cheap valuations,” he said.

In 2021, China led developing-economy IPOs with 602 new deals, followed by South Korea India, Indonesia and Brazil, according to data compiled by Bloomberg. Of those whose pricing was tracked by Bloomberg, most came in within the expected range. Since those stocks started trading, the share prices have risen by a size-weighted-average of 30%, the data show. That breaks down to gains of 37% for emerging-Asian companies, and 27% for those in Middle East and Africa. Meantime, 2021-listed Latin American and emerging European shares lost 14% and 13% since pricing, respectively.

The diversity in performance may have to do with regional recovery trends, as well as the types of companies that went public and outperformed last year. Newly listed Asian consumer, industrial and technology stocks were among those that rose, on a weighted-average basis, as did many of the companies that went public from the Middle East and Africa in the utilities and energy spaces. Losses in communication-industry listings hit Emerging Europe, while Latin American markets were broadly dragged down by political risk and continued fallout from the pandemic. 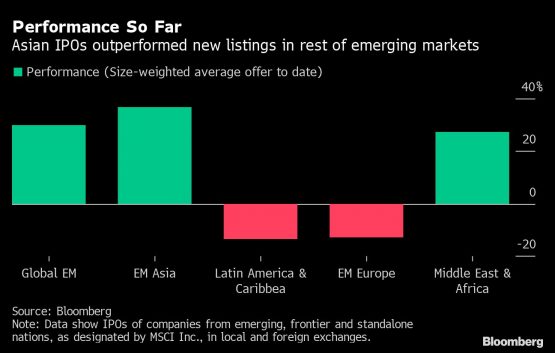 Going into 2022, regulatory crackdowns out of Beijing and new rules for China’s foreign first-time share sales may drag on momentum for IPOs. India’s capital market regulator has also tightened rules just as a rush of new-age, consumer-technology based companies, some of them still unprofitable, tap the stock markets.

Even so, the world’s second-largest battery maker in Seoul and an Indian insurer with more than 1.2 million agents are among the deals traders will be ready for this year. Dubai also plans to list a swathe of companies in a bid to lure investors and echo the success of Abu Dhabi and Riyadh’s markets, which benefited from an IPO boom last year.

In Brazil, meantime, investment bankers expect deals to slow down as interest rates surge and the country faces a divisive presidential election. Some say there could be as few as 10 Brazilian IPOs this year, down from 50 in 2021.

Among investors sizing up appetite for emerging-market equities in 2022, BlackRock Inc. has taken a neutral stance, preferring stocks from the developed world. Others — from Goldman Sachs Group Inc. to Morgan Stanley and JPMorgan Chase & Co. — are forecasting lingering weakness until at least the second half. “It is hard to see that EM as a whole will do well given that China is the 800-pound gorilla in the benchmark,” said Lu Yu, a portfolio manager at Allianz Global Investors in San Diego.

China accounts for about 30% of the MSCI Inc. benchmark of emerging-market stocks, with shares from the Asian nation down almost a quarter in 2021.

In the week ahead, traders and strategists will scour purchasing managers’ indexes for signs of economic strength as nations from China to India, Mexico and Brazil release data.

Here are some of the main economic data releases to watch: