Where the government is pledging to spend more on cleaner alternatives.
By Gwen Ackerman and Filipe Pacheco, Bloomberg 29 Aug 2020 Solar energy and renewable power storage stocks are outperforming oil and gas producers in Israel, where the government is pledging to spend more on cleaner alternatives just as investors seek to diversify away from fossil fuels.

Augwind Energy Tech Storage, Apollo Power and Brenmiller Energy are this year’s best performers among 32 energy shares listed in Tel Aviv, each rising more than four-fold. Trading volumes in the sector’s mostly smaller and mid-cap companies have surged in recent months as oil and gas stocks slumped alongside a sharp drop in prices. 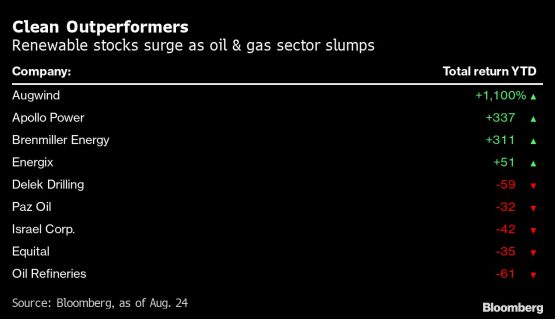 Some of Israel’s biggest investors have become prominent shareholders in these companies as global attention increasingly turns to cleaner energy. The government has set a goal of getting almost a third of power supplies from solar by the end of this decade and to stop burning coal six years from now. That’s helped drive the stocks’ outperformance, said Ella Fried, senior analyst for Leumi Capital Markets in Tel Aviv.

“Usually, investors go conventional, but here it is obvious that the government targets for alternative energy are strong,” said Fried. “This is a global phenomenon and suddenly Israel has companies doing well, that look serious and are profitable. And, of course, there are very positive growth expectations.”

Extra impetus has come from institutional investors who felt over-exposed to the Israeli gas sector and are looking for new ways to build stakes in the energy industry, according to Fried.

Israeli Energy Minister Yuval Steinitz said in June he plans to boost the proportion of solar energy to almost 30% of the country’s power sources by 2030. The intention is to invest 80 billion shekels ($24 billion) in reforms that will see coal phased out by 2026.

“We are going to make Israel number one in solar energy,” Steinitz said in an August 11 interview. “This means we will have to make an enormous investment in solar systems and energy storage.”

Here’s more about the companies benefiting from the cleaner energy push: