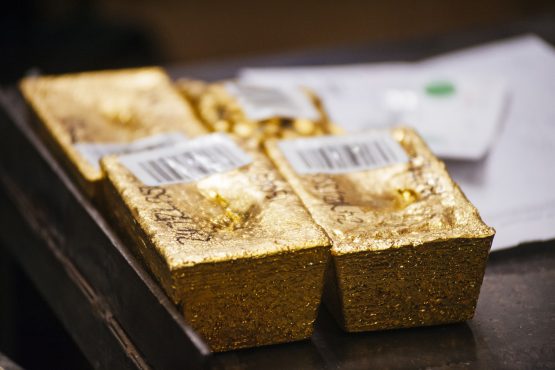 Image: Waldo Swiegers/Bloomberg
This article has been corrected since first publication, to say that shipments have been disrupted, not stopped, and that the refinery is turning to chartered planes to move gold.

A South African refinery said gold shipments to London have been disrupted because of a lack of commercial flights, adding to the turmoil that’s upending the physical bullion market.

South Africa’s Rand Refinery Ltd., the continent’s only gold refiner accredited with the London Bullion Market Association, said it’s exploring back-up plans and alternative measures to be able to meet its delivery commitments to the London gold market. The company is turning to chartered planes to minimise disruptions to shipments.

“The supply from the established mines on the African continent to the refinery is currently disrupted,” said Chief Executive Officer Praveen Baijnath. “We are working hard with global logistics service providers to ensure our inbound and outbound commitments can be achieved.”

He didn’t specify how much gold could be affected. Still, it’s another example of how the supply chain — which runs from deep African mines to refineries and storage vaults — is being upended by the coronavirus. Earlier this week, refineries in Switzerland also announced they would temporarily close.

In one sign of how things have slowed down, shipping Russian gold overseas can now take about a week instead of a day, said Alexey Zaytsev, head of commodities & funding products at Otkritie bank.

The LBMA, which oversees the spot market, said it’s confident there is sufficient global refining capacity and that refiners and other market participants are talking with logistics companies to ensure the physical movement of metal.

The Rand Refinery can operate at between 40% to 60% of capacity, depending on quantities of gold it receives during the national lockdown, Baijnath said. It was exempted from restrictions aimed at curbing the virus’s spread.

He said it’s important to keep some processing going because selling gold is a key source of foreign exchange revenue. The facility refines gold for companies including AngloGold Ashanti Ltd. and Gold Fields Ltd., which operate mines throughout Africa. The refinery, which has operated since 1920, sources gold from countries including Ghana, Tanzania and Mali.

“A complete shutdown of the refinery would have had a domino effect on the production on the continent,” he said.

“Moreover, stockpiling of mined gold on the surface would have heightened security risk for any mine.”