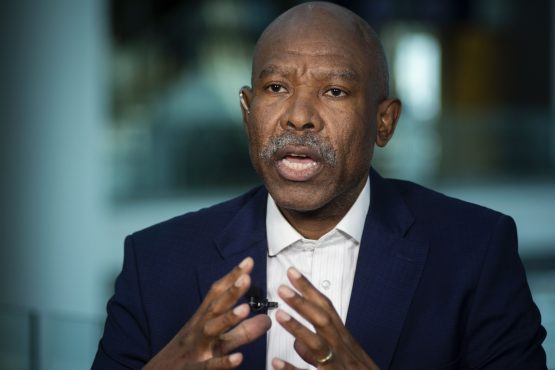 The recent unrest could have lasting effects on investor confidence and will likely slow the recovery from 2020’s pandemic-induced contraction, says Kganyago. Image: Waldo Swiegers/Bloomberg

South Africa’s central bank softened its stance on raising borrowing costs this year as the country reels from deadly riots and a third wave of coronavirus infections.

While the monetary policy committee (MPC) unanimously voted to leave the benchmark interest rate at a record low 3.5% for a sixth straight meeting, the implied policy rate path of the central bank’s quarterly projection model now shows the repurchase rate at 3.79% by the end of 2021, compared with 4.07% at the previous MPC meeting. The model, which the MPC uses as a guide, indicates a 25 basis-point increase in the final quarter of this year and in every quarter of 2022. However, policy decisions will continue to be data-dependent, especially with economic and financial conditions that are “expected to remain volatile for the foreseeable future,” Reserve Bank Governor Lesetja Kganyago said.

The central bank had planned to revise its economic growth forecast upward after a better-than-expected first-quarter expansion, but deadly riots, looting and arson that erupted in South Africa last week led it to keep its 2021 estimate unchanged at 4.2%, Kganyago said.

Last week’s riots could have lasting effects on investor confidence and job creation, and will likely slow the recovery from 2020’s pandemic-induced contraction, he said.

“Recent events in the country, their impact on vaccinations, a longer-than-expected lockdown, limited energy supply and policy uncertainty pose downside risks to growth,” the governor said.

Growth forecasts for 2022 and the year after remain unchanged at 2.3% and 2.4% respectively and the central bank still only sees output returning to pre-virus levels in 2023.

“We expected the MPC to be more dovish given that the recovery has been set back a little bit as a result of the riots,” said Johann van Tonder, an economist at Momentum Investments. “It will be premature to increase interest rates before we reach pre-pandemic levels, within an environment where inflation is still low.”

The central bank raised its inflation estimate for this year to 4.3% from 4.2% and continues to project that the rate of price growth will remain close to the 4.5% midpoint of its target range through 2023.

Fuel, electricity and administered prices present short-term risks to the outlook and the bank may have to remove accommodation if the risks materialise, Kganyago said. “There was a little more emphasis on the underlying risks to inflation,” Kevin Lings, the Johannesburg-based chief economist at Stanlib Asset Management, said by phone. “That is going to be a focus.”

The unchanged stance is likely to draw criticism from politicians and labour unionists, who say the Reserve Bank should be doing more to support an economy that contracted the most in a century last year and reduce unemployment that’s at a record high.

However, trading in the nation’s stocks and bonds shows investors are fleeing in favour of other emerging markets where central banks have started tightening.

Foreigners have been net sellers of South African equities for 31 of the last 37 trading sessions through Wednesday, pulling $2.63 billion from the domestic market. Non-residents have also dumped the country’s debt, with outflows totaling $1.4 billion since June.

Portfolio flows are likely to remain negative “until the government is roused from its inertia to enact the reforms it has long promised and take the measures investors are waiting for,” said Stephen Meintjies, head of research at Momentum Securities.

With assistance from Simbarashe Gumbo and Adelaide Changole.