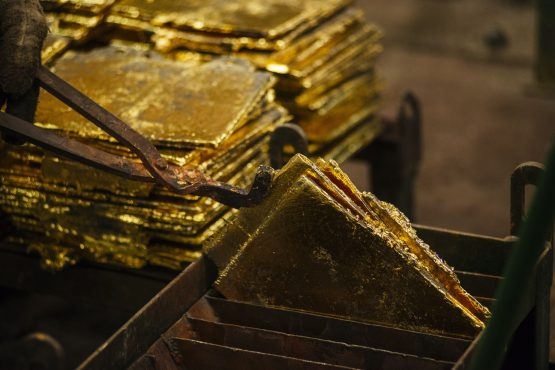 Gold posted the biggest seven-day rally since the 2008 financial crisis after investors’ expectations for a quick deal between the US and China evaporated on Wednesday. Picture: Bloomberg

Donald Trump’s trade offensives against China, Europe and Mexico may be driving the global markets into a frenzy, but the uncertainty is just the fix South Africa’s gold-miner stocks needed.

A Johannesburg index tracking producers of the precious metal posted the longest rally since the 2008 financial crisis after investors’ expectations for a quick deal between the US and China evaporated. That has vindicated analysts, who have raised earnings forecasts for South African gold miners by 35% this year, seven times as fast as estimates for the broader market. The average profit estimate for the FTSE/JSE Africa Gold Mining Index now matches that of the FTSE/JSE Africa All Share Index when measured over five years, according to data compiled by Bloomberg. Three factors are fuelling analysts’ optimism on gold-mining companies.

Renewed trade tensions have brought back the hunt for haven assets Federal Reserve Chairman Jerome Powell has signalled a willingness to cut interest rates, boosting the appeal of the non-interest-bearing asset The rand’s 11% slump since January is boosting exporters’ earnings. 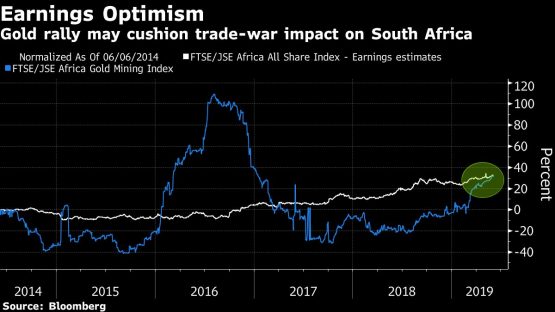 The gold-mining index has jumped 24% since January, eclipsing a 5.4% gain for the all-share index. That’s taken the valuation of the subgroup gauge above that of the benchmark index. Johannesburg gold stocks were little changed as of 10:53 a.m. Thursday.

The factors behind gold’s advances are deepening.

The World Bank has already cut its 2019 global growth projection to 2.6%. Trump has signalled he’s in no hurry to seal a trade deal with China and has left open the option of imposing punitive tariffs on another $300 billion of goods.

A weaker currency encourages exports, which make up 30% of South Africa’s gross domestic product, according to the World Bank. The rand could weaken even further as analysts predict cuts to the South African base rate following the worst quarterly GDP performance in a decade.

“The GDP number may imply that the rate cuts may be brought forward, with potentially a rate cut this year,’’ Cloete said.

The Fed has pledged to keep a close eye on the fallout from the disputes between US and its largest trading partners, which have pushed business confidence lower, deepened the slowdown in global trade and led to sluggish investment in emerging and developing economies.