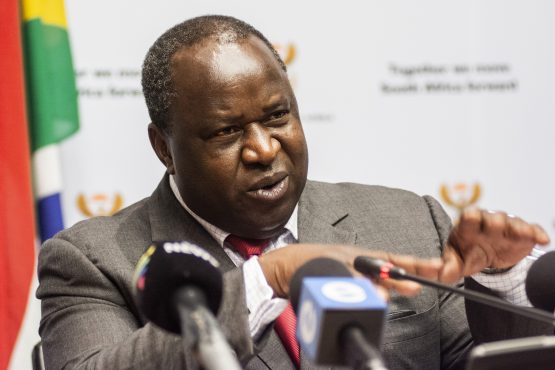 'I must emphasise that this additional government support cannot be a blank cheque to these state-owned enterprises,' Tito Mboweni said on Thursday. Picture: Bloomberg

South African Airways will receive additional state funding after chief executive officer Vuyani Jarana resigned over what he said was a lack of government support for the loss-making carrier.

Finance Minister Tito Mboweni included the country’s flagship airline on a list of companies that will be get support from the country’s contingency reserve account. Power utility Eskom, South African Broadcasting Corporation and weapons maker Denel were also identified as in need of aid.

“I must emphasise that this additional government support cannot be a blank cheque to these state-owned enterprises,” Mboweni said on Thursday. “We really and truly cannot go on like this.”

SAA needs a clear government commitment of support for lenders to deal with the company, Jarana said in his resignation letter released early last month. The airline went unmentioned in both President Cyril Ramaphosa’s state-of-the-nation address last month and finance minister Tito Mboweni’s budget in February, raising concerns about how it will handle R9.2 billion of debt set to mature later this year. A R3.5 billion bridge facility was expected to run out at the end of June.

Chairman JB Magwaza quit the struggling state-owned airline on Monday, according to Adrian Lackay, a spokesman for Public Enterprises Minister Pravin Gordhan. He didn’t give a specific reason for the chairman’s decision.

The departure of Magwaza and Jarana exacerbates the leadership vacuum at South African state companies, many of which are in financial distress and in need of a radical overhaul. Eskom, SAA and ports and rail operator Transnet are all run by interim CEOs, with few obvious replacement candidates.

“We really and truly cannot go on like this.”

We’re not going go on like this Tito. Chances look good we will do even worse.

We can not but we do.

What about cutting cost to meet your budget? They run id like a government deficit. You forecast a loss and then go and get a loan.

Cut people. Do away with BEE especially the supply chain side that is just a racket for corruption and thievery. If you have to sell the thing.