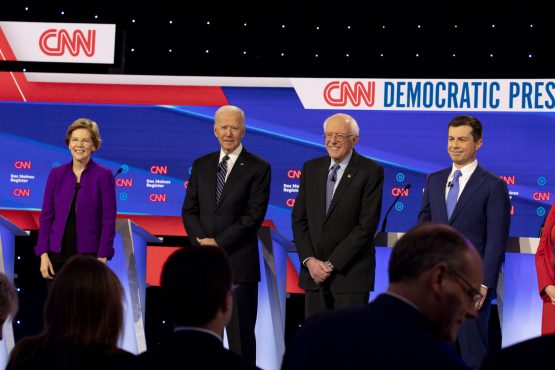 A new poll found Senator Bernie Sanders and former Vice President Joe Biden have the most support among Democratic voters in New Hampshire, though they were closely followed Senator Elizabeth Warren and former South Bend, Indiana Mayor Pete Buttigieg, who were both within the survey’s margin of error.

About 16% of likely voters said they support Sanders, with 15% saying they preferred Biden, according a Suffolk University/Boston Globe poll released Tuesday. Sanders and Biden were closely trailed by Buttigieg, with 12%, and Warren, with 10%. The results for Warren and Buttigieg were both within the poll’s 4.4 percentage-point margin of error.

Buttigieg, at 14% support, was most likely to be voters’ second-choice candidate, closely followed by Warren, Sanders and Biden.

The results show a tight race that remains in flux in the weeks leading up to start of presidential balloting. The poll indicates the standing could change as more voters make up their mind or change their first choice after seeing how the candidates perform in the February 3 Iowa caucus.

About 24% of likely Democratic primary voters said they were still undecided. Nearly half, about 47%, said their first choice could change before the February 11 primary. The poll was conducted January 15 -19.