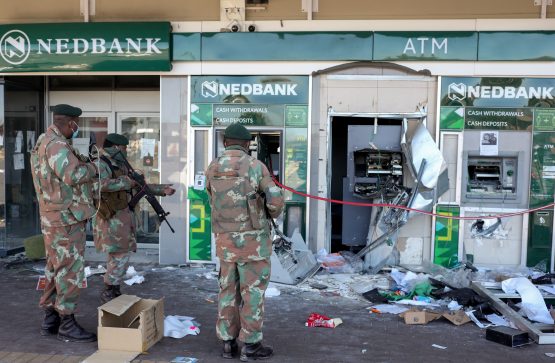 If not for the unrest, the economy could have recouped most of last year’s pandemic-induced GDP losses by the end of 2021 – Sarb. Image: Siphiwe Sibeko/Reuters

South African central bank modelling suggests the need for the gradual lifting of borrowing costs to keep inflation close to the 4.5% midpoint of its target range, and long-term interest rates low.

The key rate is at a record-low 3.5%, after the monetary policy committee (MPC) cut it by three percentage points in 2020, of which 275 basis points of easing was to counter the damaging effects of the Covid-19 pandemic.

Since the start of this year, none of the five MPC members have voted for further easing and the panel has consistently indicated that the next move will be an increase.

The stronger-than-expected economic recovery in the first half of 2021, when output rose 7.5% from a year earlier, suggests inflation pressures may be stronger than initial predictions.

Price increases are already around 4.5% where the central bank prefers to anchor expectations.

That, together with the narrowing between potential growth and actual expansion means the benchmark rate must move toward its neutral level over the medium term to reduce stimulus and keep price growth contained, the South African Reserve Bank (Sarb) said on Tuesday in its six-monthly Monetary Policy Review.

The implied policy rate path of the central bank’s quarterly projection model, which the MPC uses as a guide, indicates a 25-basis point increase in the final quarter of this year and in every quarter of 2022 and 2023. Forward-rate agreements, used to speculate borrowing costs, are pricing in an almost 100% chance of a quarter-point increase at the bank’s November meeting, while most economists expect the benchmark to remain unchanged until the first quarter of next year.

That’s as economists expect the MPC to continue supporting an economy seen contracting in the three months to the end of September, partly due to deadly riots, arson and looting that erupted in July and derailed economic activity in the two biggest provinces by contribution to gross domestic product (GDP).

If not for the unrest, the economy could have recouped most of last year’s pandemic-induced GDP losses by the end of 2021, the central bank said.

The bank expects the economy to contract 1.2% in the third quarter and for growth to average 5.3% in 2021, a sharp recovery from last year when output fell the most in almost three decades. Should that translate to higher demand, risks to the inflation outlook could become more pronounced.

While South Africa’s modest inflation trajectory underpinned the MPC’s decisions to keep the key rate on hold since July 2020, risks to the outlook “have risen and become more broad-based, while real rates have become more negative as expected inflation has risen,” the bank said.

“These developments imply a need for interest rates to begin normalising. The nominal repo rate is expected to gradually rise toward its neutral level over the medium term,” it said.

The domestic neutral rate is calculated at about 2.1%, the central bank said in July.

While policymakers prefer to anchor price-growth expectations around the middle of the target range, Reserve Bank Governor Lesetja Kganyago has previously said that isn’t optimal and has recently been advocating for a lower, single-point target close to 3%.