Any consolidation in the sector must benefit the country as well as shareholders.
By Felix Njini and Loni Prinsloo, Bloomberg 30 Mar 2021  08:31 Africa’s biggest fund manager and a key investor in South African gold companies said any consolidation in the sector must benefit the country as well as shareholders.

The Public Investment Corp., which manages R1.91 trillion ($128 billion) of mainly South African government worker pensions, has a broader mandate than purely shareholder returns, said Mdu Bhulose, portfolio manager for mining and resources at the money manager. It also considers potential job losses, the welfare of communities in which mining companies operate as well as the interests of the broader South African economy, he said. That will affect the way it assesses, proposals, he said.

Bhulose’s comments come amid speculation that Johannesburg-based Anglogold Ashanti Ltd. and Gold Fields Ltd., could be takeover targets for foreign buyers because of their relatively low valuations. Neal Froneman, the chief executive officer of South African gold and platinum miner Sibanye Stillwater Ltd., has said the three companies should combine to avoid being bought by companies based elsewhere.

“Is this going to be a value destructive deal for the country?,” Bhulose said of the PIC’s approach to potential takeovers in an interview last week. “We look at returns, but also what impact it will have for all other stakeholders.”

The PIC is the biggest shareholder in AngloGold, holding 11.9%, and the second-largest in Gold Fields with 9.6%. In Sibanye, its 15.9% holding is the biggest of any investor.

Newmont Corp., the world’s biggest gold miner by market value, has a price-to-earnings ratio that’s more than double both AngloGold and Gold Fields, highlighting the discount at which the South African producers trade.

While AngloGold and Gold Fields have shifted their focus to more profitable operations elsewhere in Africa, Australia and the Americas, they retain their primary listings on Johannesburg’s stock exchange. 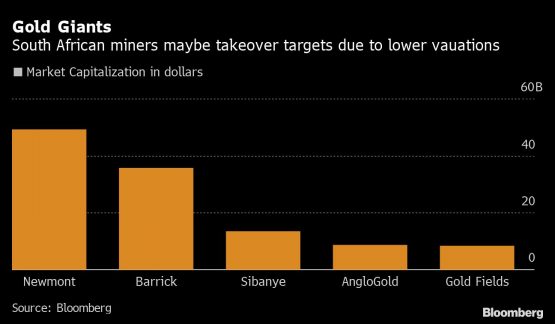 “If you trade at a discount, somebody that trades at a premium is going to buy you,” Froneman said in an interview earlier this month. “AngloGold, Gold Fields and even us, we are targets for North American producers.”

Gold Fields, founded by Cecil Rhodes in 1897, runs South Deep mine, its sole remaining asset in South Africa. AngloGold, which emerged from a mining empire created by Ernest Oppenheimer a century ago, sold its last mine in South Africa last year and has been mulling moving its primary listing elsewhere.

“If the answer is that you will get more from the assets when you put them together than if they are apart, certainly there is merit to that transaction,” Bhulose said. “We need to evaluate what management teams can prove on paper in terms of creating value, and how they can manage these businesses to deliver more value.”

So what does it mean when your PE ratio is less than half that of companies elsewhere in the world?

Think about it and then ask what could possibly be the reason not many investors see SA as an investment destination?? Maybe the “Cadre” quoted in the article says it all.

Come on PICF — Buy SAA, PRASA. ESKOM, DENEL et al for the benefit of your esteemed clients and then tell them why they have to die in poverty because their money has been squandered by you and your ilk.

Sorry but not a great article… Mr. Mdu Bhulose is stating the obvious… No additional value creation… no merger…