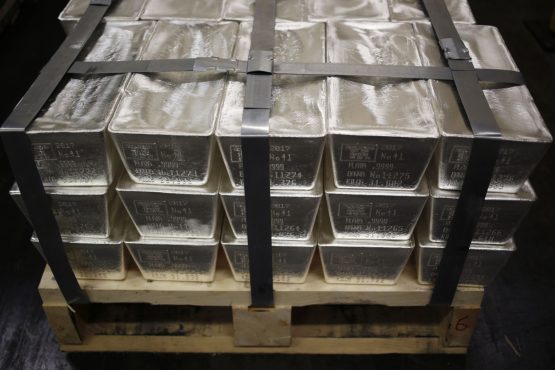 Silver surges to the highest level since 2013. Image: Bloomberg

Silver surged to the highest in almost seven years and gold continued its march toward a record on expectations there’ll be more stimulus to help the global economy recover from the coronavirus pandemic.

Investors have flocked to the metals on surging demand for havens amid a resurgence in virus cases, slowing growth, negative real interest rates in the U.S., flaring political tensions and a weaker dollar. The vast amounts of stimulus unleashed by governments and central banks have also aided prices and, after the success of a European rescue package this week, focus turns to negotiations on legislation to prop up the American economy.

Silver jumped more than 8% — the biggest gain since March — and has been getting an added boost from supply concerns and optimism about a rebound in industrial demand. Holdings in exchange-traded funds backed by silver are at a record, while gold ETF holdings rose the most since mid-June on Tuesday and also sit at the highest ever. 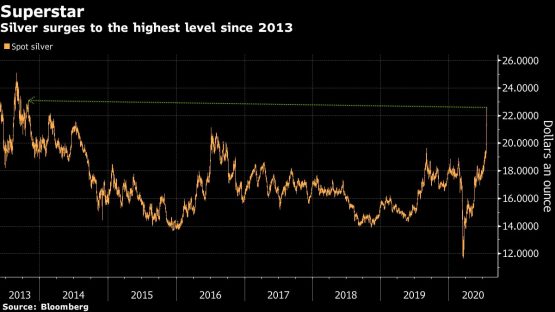 “It’s a typical low liquidity summer market where prices tend to be easier to push, especially when momentum has been established as per the trifecta of support,” said Ole Hansen, head of commodity strategy at Saxo Bank A/S. “The closer gold gets to its record high the stronger the magnetic field will become and that could see it challenge that level before long.”

Silver should also continue its run as long as it has support from higher gold, as well as a weaker dollar and bets for more industrial demand, he said.

The fear of missing out “is driving a flood of speculative money into gold, piling on top of January-June’s heavy physical demand,” said Adrian Ash, director of research at BullionVault.

Still, some investors have turned to selling given the recent rally. BullionVault saw gold trading volumes double from the prior 30-day average in the last 24 hours, with sales rising faster than purchases. Movements in silver were even more dramatic, he said.

Both metals’ relative-strength indexes are above 70 too, suggesting that they may have become overbought.

“Silver has now reached an extreme value. We do not expect silver prices to continue to rise at the same rate,” said Alexander Zumpfe, a trader at Heraeus Metals Germany GmbH & Co. KG. “However, we also believe that a significant correction in the current environment is unlikely.”