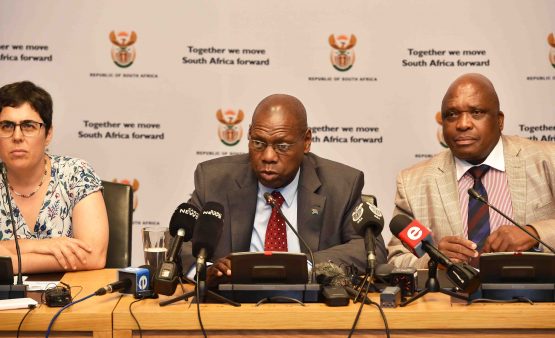 Minister of Health Dr Zweli Mkhize briefs the media on the first case of Coronavirus in South Africa at the Imbizo Media Centre in Parliament, in early March. Image: GCIS

South Africa needs to conduct “hundreds of thousands” of coronavirus tests to understand the true number of infections and halt their spread, Health Minister Zweli Mkhize said on Wednesday.

South Africa has the highest number of coronavirus cases in sub-Saharan Africa, and the government is worried that infection rates could get out of hand if the virus starts spreading rapidly in the country’s poor and overcrowded townships.

Officials have imposed some of the toughest anti-coronavirus measures on the continent, including a 21-day “stay at home” lockdown that started on Friday.

Mkhize said officials were moving away from a testing model focused on people with symptoms to one that also targeted communities where people with mild symptoms could be slow to seek medical help.

Mkhize told a news conference that testing criteria had been “reactive and restrictive”.

“We need to test hundreds of thousands of the population to get a better picture and refine our containment strategy,” he added.

South Africa has conducted around 47 000 tests, with 1 380 confirmed cases of the virus and five deaths.

It can currently conduct around 5 000 tests a day and hopes to expand that to 36 000 a day by the end of April, according to the national laboratory service.

Mkhize said the government was sending 67 mobile testing vans across the country.

“Even though we talk about 47 000 tests, they are still far too little, because of the nature of our country, the nature of the disease burden, the inequalities.”

Health workers started testing people in the Alexandra township near Johannesburg’s financial district on Tuesday, and there are plans to move to other townships in the coming days.

Mkhize said South Africa could seek reinforcements from China and Cuba to help with containment efforts and that it was important to make quick progress.

“Next month the flu season will start, thus making more people sick with similar symptoms … these will flood our hospitals and clinics and create a fertile ground for coronavirus to spread,” he said. “We might be currently experiencing a calm before we have a devastating storm.”

We are walking around with a false sense of positiveness just because we are not testing.