The beleaguered leader sent his resignation to the parliament Speaker Mahinda Yapa Abeywardena soon after landing in Singapore on Thursday.
By Anusha Ondaatjie and Asantha Sirimanne, Bloomberg 15 Jul 2022  08:48 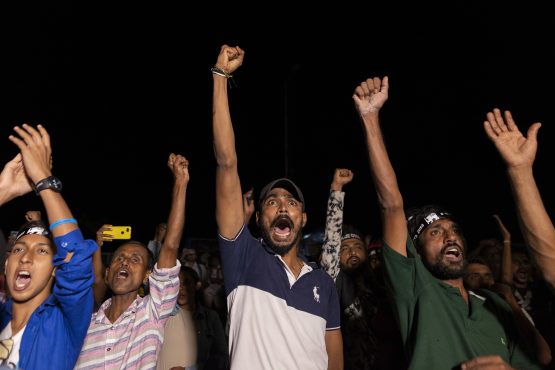 Gotabaya Rajapaksa has stepped down as Sri Lanka’s president with protesters taking to the streets to celebrate into the early hours of Friday after days of anti-government demonstrations and tense stand-offs with security forces.

The beleaguered leader sent his resignation to the parliament Speaker Mahinda Yapa Abeywardena soon after landing in Singapore on Thursday, according to people with knowledge of the matter. The speaker formally announced Rajapaksa’s exit in a televised statement on Friday.

Rajapaksa’s departure has left a power vacuum in the island nation with the International Monetary Fund saying Sri Lanka needs leaders in place for talks on lending support to resume. Yapa Abeywardena said that parliament would meet on Saturday and a new president would be chosen within seven days. 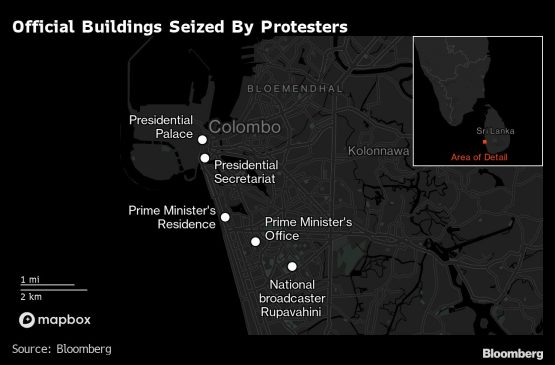 Lawmakers will elect a new president within seven days, the parliament speaker said after formally confirming Rajapaksa’s resignation. Yapa Abeywardena also called for support from all parties to help ensure a smooth transition and transfer of power.

Days of tense stand offs with security forces and mounting anger against the government gave way to spontaneous celebrations as protesters cheered the news of Rajapaksa’s resignation.

Revelers gathered at the main protest site facing the presidential secretariat to sing and dance, with many making pledges to keep pushing for new leadership.

After checking the authenticity and completing necessary legal matters, an official statement on the resignation will be made on Friday.

The International Monetary Fund hopes to resume talks with Sri Lanka on lending support as soon as possible, but will need Colombo to have higher authorities in place for that to happen, spokesman Gerry Rice said. Sri Lanka’s debt is currently “unsustainable,” and assurances on sustainability would be required for the IMF board to approve any future program, he said.

The country’s crisis emanates from an economy wrecked by a combination of mismanagement, a slump in tourism due to the pandemic, and a surge in import costs due to the war in Ukraine.

Rajapaksa Was Fearful for His Life, Maldives Speaker Says (7:36 p.m.)

President GR has resigned. I hope Sri Lanka can now move forward. I believe the President would not have resigned if he were still in Sri Lanka, and fearful of losing his life. I commend the thoughtful actions of the Govt of Maldives. My best wishes to the people of Sri Lanka.

Rajapaksa has sent his resignation via email to the parliament Speaker Mahinda Yapa Abeywardena soon after he arrived in Singapore Thursday after fleeing months of anti-government protests, according to people with knowledge of the matter.

“He has not asked for asylum and neither has he been granted any asylum. Singapore generally does not grant requests for asylum,” the ministry said in a statement.

Earlier, a Saudi Arabian Airlines flight from Maldives landed in Changi Airport and it’s believed to have carried Rajapaksa and a small entourage.

Colombo All-Share Index dropped as much as 1.4%, but recouped more than half of the losses to close with a decline of 0.6%. The market was shut for trading on Wednesday for a local holiday and had climbed in the previous three sessions.

Opposition to Name a Consensus Candidate For PM (2:20 p.m.)

Opposition parties will discuss naming a consensus candidate for the post of prime minister, lawmaker Harsha de Silva said in a Twitter post. De Silva said the decision followed a request by Wickremesinghe, who is now acting president in addition to being the premier.

The name of the proposed candidate will be handed over to the Parliament Speaker Friday, he added.

Responding to request by PM @RW_UNP to @ParliamentLK Speaker to propose a name by consensus for PM, opposition parties will today discuss with various parties and groups in government to get such consensus. We will propose this name to Speaker at 10am tomorrow. #SriLankaCrisis

Saudia flight 788 from Male was being tracked by almost 5,000 users as of 7:43 a.m. GMT, according to data from Flightradar24.com, more than three times the number of people tracking a French Air Force plane flying in Europe.

Wickremesinghe issued order for curfew to be imposed in the Colombo district from noon Thursday, until 5 a.m. local time on July 15. The acting president had clamped an overnight island-wide curfew Wednesday, that ended at 5 a.m., after his office was occupied by protesters and there were attempts to storm parliament.

UN Secretary General Antonio Guterres said he is following Sri Lanka’s situation “very closely” and stresses the need to address protesters’ grievances. He called on party leaders to embrace “spirit of compromise” for a peaceful and democratic transition.

I continue to follow the situation in Sri Lanka very closely. It is important that the root causes of the conflict and protestors’ grievances are addressed. I urge all party leaders to embrace the spirit of compromise for a peaceful and democratic transition.