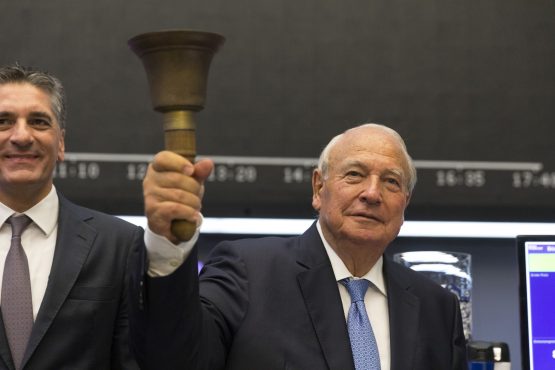 Some of the world’s wealthiest people have sold more than $3 billion of stakes in their major holdings since August, diversifying their fortunes as stock markets rebounded.

Heinz Hermann Thiele offloaded about $1.2 billion in shares of Knorr-Bremse, the German brake manufacturer that underpins his fortune. Pieter van der Does and Arnout Schuijff, co-founders of Adyen, were part of a group of executives that sold stock in the Dutch payment firm worth $821 million, while Steven and Mitchell Rales pocketed almost $1 billion through Fortive.

Volatility has picked up in recent weeks, with stocks halting a rebound that added as much as $30 trillion in global market value since the turmoil brought on by the coronavirus pandemic. That’s prompted many investors to reassess the concentration of their wealth and take some money off the table. In the week ended September 11, insiders disclosed selling $473 million of shares, while buying only about $9.5 million.

“It’s the first time most people have lived through something as real, sharp and sudden as this,” said Claire Madden, managing partner of Connection Capital, a London-based private-equity firm whose investors include high-net-worth individuals. “It does make you reevaluate.”

Most of the world’s biggest self-made fortunes are tied up in a single asset. Take Jeff Bezos: Amazon.com shares represent $172 billion of his $186 billion net worth. Mark Zuckerberg’s 13% stake in Facebook makes up almost all of his $103 billion wealth, while Amancio Ortega’s holding in Zara owner Inditex accounts for the bulk of his $60 billion fortune, even with a $17 billion property empire.

Malaysian billionaire Lim Kuang Sia, founder of Kossan Rubber Industries, also sold shares in late August, collecting more than $30 million from a stake in the latex glove company that surged during the pandemic, before buying back a small portion last week. Lee Wai Keong of Riverstone Holdings, another glovemaker, raised $45 million in a share placement earlier this month. Billionaire Leslie Wexner offloaded $89 million of his L Brands in August, highlighting a month in which stock sales from executives, board members and large shareholders in US-listed firms reached their highest levels this year.

“Stock-market valuations have climbed considerably regardless of fundamentals,” said Seo Sang-young, an analyst at Kiwoom Securities Co. in Seoul. “Volatility has been increasing.”

While some billionaires are selling stock, others are doing the opposite. Japan’s Masayoshi Son and French media magnate Patrick Drahi are looking into taking their companies private after recent wild stock swings. Hong Kong real estate tycoon Peter Woo and the family behind Li & Fung, the world’s biggest supplier of consumer goods, are among those who took their firms out of the market spotlight earlier this year.

The sale by Thiele, who’s worth $19.2 billion, will support his other investments, according to terms seen by Bloomberg, similar to the explanation given for a previous reduction of his majority stake in Knorr-Bremse this year. Adyen’s founders offloaded their shares to diversify their holdings and reduce single-stock risk, the company said in a statement.

The Rales, who spun out Fortive from Danaher in 2016, didn’t disclose a reason for their sales. A Fortive representative didn’t respond to a request for comment.