Parliament convenes on Saturday to decide on a Brexit deal, paving the way for a new chapter for the British pound. Image: Shutterstock

So we have a Brexit deal, at least until Parliament convenes on Saturday. This opens a new chapter for the pound, which has traded between $1.20 and $1.30 in the past six weeks as odds shifted from a no-deal Brexit to a last-minute compromise with the European Union. The math at the House of Commons is tight and the potential range of outcomes — from a deal to a general election — remains wide. What happens from here could force the battered currency to break out of either end of its recent trading pattern.

Should a divorce deal pass parliament, there’s no doubt the pound will get a handsome pop. Options show sterling could rally more than 4% from $1.29 currently to at least $1.35 within three months, if a deal emerges by October 31 or even with a short technical extension thereafter.

Most models suggest the currency remains below fair value — some like producer-based purchasing-power parity and the Big Mac gauge indicate it’s more than 20% undervalued. The currency’s real-effective exchange rate has slumped more than 17% since its cyclical peak before the 2016 referendum, driven largely by the risk premium generated by Brexit uncertainty. A deal would erase much of that premium and see sterling strengthen immediately. 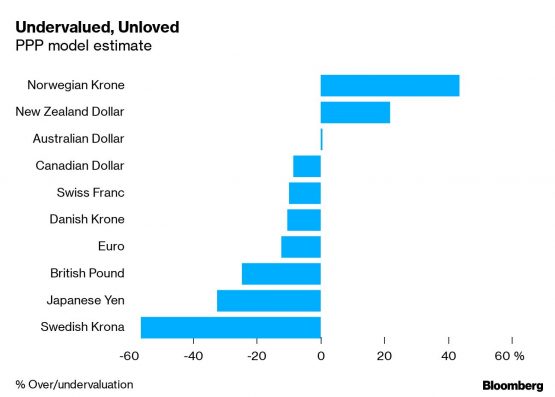 There’s a vast array of potential political outcomes heading into Saturday and most are speculative at this point. But if we get a general election, then that could lead to a stronger pound should the vote either pave the way for a second referendum, or a deliver a stronger Conservative Party mandate.

Given the parliamentary math, it’s clear Prime Minister Boris Johnson will struggle to get a deal through. Should his efforts end up in a confidence vote and an election, Johnson and the Conservatives will be hitting the campaign trail off the back of a yet another failure to pass a deal. No self-respecting Tory campaign could tout no-deal as the preferred option without also highlighting the failure to win acceptable concessions from Brussels. Meanwhile, a second referendum has already won support from Labour and the Liberal Democrats, and brings with it the outside chance of the UK remaining in the EU permanently. That would be a clear positive for the currency. Based on this scenario analysis, the probability of a no-deal exit should decline relative to that of a second referendum, and pound should be priced higher.

If a deal is reached, Johnson will probably call an election to entrench his position. While the electoral math is hard to parse, the afterglow of having taken Britain successfully out of the EU would help his return to power. If he and the Conservatives come back with a bigger mandate, Johnson may follow through on his promise of turning the UK into a low-tax economy. That’s likely to boost spending in the short term and shift the demand curve higher, which could spur inflation and build the case for Bank of England policy tightening. In fact, Deputy Governor Dave Ramsden said a smooth Brexit would put interest-rate increases on the table.

Brexit deal or not, there are limits to sterling upside as a still-bleak economic backdrop contributes to a growing chorus of caution at the BOE. It’s hard to see UK policy-makers going against the tide of central bankers worldwide acting to support global growth. Below-target inflation is a trend poised to be inflamed by the recent sterling rise, which would sustain BOE caution, as well as current market pricing of nearly one rate cut by the end of 2020. That would likely cap pound performance at around $1.32 through year-end. Clarity on the shape of Brexit is likely to do little to revive stumbling growth, and business pessimism that has curbed investment activity is unlikely to fade. Hopes for a bounce from pent-up investment demand could prove elusive. It’s unclear whether investment plans have been deferred or cancelled, and election and global trade uncertainty are likely to keep firms on the sidelines. If anything, a deal would only sharpen the focus on the next stage of Brexit: untangling the complexities of the future trading relationship between the UK and the EU. That’s likely to dissuade firms from embarking on large capital spending plans in the near term.

All this should maintain expectations for longer-term sterling weakness, with three-month GBP/USD and EUR/GBP risk reversals still favoring the downside. In fact, the options market is now more bearish than it was a week ago, when the rally in spot started. Against this backdrop of entrenched negative sentiment, a general election would only strengthen the downside bias. While there are several outcomes that would offer the currency a way upward, there are a myriad of other potential results that won’t be pound-friendly — a hung parliament or a majority that supports a no-deal Brexit. Such uncertainty would not only limit sterling strength, but also reignite potential declines back toward this month’s lows below $1.22 in cable and around 90 pence per euro.

The observations made by the writers are their own, and not intended as investment advice. For more markets analysis.