The world remembers 9/11 on 20th anniversary of attacks 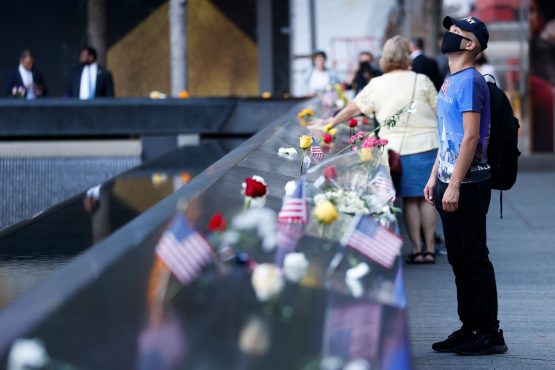 Back then, the world froze as four hijacked planes slammed into the World Trade Center, the Pentagon and a Pennsylvania field and brought nearly 3,000 people to their deaths. Lower Manhattan was torn to pieces, residents unsure if it would ever recover. Washington was under attack. Americans were terrified. Global markets plunged.

In the two decades since, foreign policy has been upended. Security measures at global borders, airports and office buildings reshaped travel and international business. New York City was transformed.

The echoes of the destruction wrought on 9/11 — and what it took to rebuild after — haven’t been lost on those gathering Saturday at Ground Zero, resounding the message by New York Governor Kathy Hochul: “We never forget, but we go forth into the future steeled in the conviction that yes, we were knocked down, but we are never out. Whether it’s a terrorist attack, whether it’s the pandemic.”

Hochul joined President Joe Biden and other U.S. officials at the National September 11 Memorial & Museum to read the names of those killed in the attack. The annual reading is held by the nonprofit, chaired by former New York City Mayor Michael Bloomberg, the founder and majority owner of Bloomberg LP, the parent company of Bloomberg News.Biden, U.S. officials gather at National September 11 Memorial & Museum.

The memorial began with a moment of silence at 8:46 a.m. to commemorate the moment when the first plane, American Airlines Flight 11, hit the North Tower. Family and friends of the victims then began reading the names of nearly 3,000 people who died in the attacks, as well as during the 1993 bombing of the complex.

Other intervals of silence include:

“9/11 was that moment when the world literally came together,” Alice Greenwald, president and CEO of the memorial and museum, said in a Bloomberg Radio interview Friday. “Its legacy is ongoing.”

Streets around New York City were closed Saturday as New Yorkers commemorate the somber anniversary. Much of Lower Manhattan was closed off on Saturday for the ceremony at Ground Zero, according to the New York City Police Department. That includes areas bound by Barclay Street on the north, Rector Street on the south, Broadway on the east and West Street on the west.

Department of Homeland Security Secretary Alejandro Mayorkas assured Americans on Friday that there was “no specific, credible threat” to safety at a briefing Friday alongside Hochul and de Blasio.

Mayorkas, Hochul and de Blasio were briefed by the New York Police commissioner and other law enforcement agencies on joint initiatives in place to ensure New Yorkers are safe on the 20th anniversary of the attacks.

Officials told residents to expect a large, armed police presence across the city on Saturday, not just near Ground Zero.

“I just want to alert New Yorkers: you will see increased presence,” Hochul said of the planned security and the visibility of police with firearms. “We’ve deployed more resources for the Port Authority, the MTA. You’ll see more people, you’ll see individuals with longarms, you’ll see them looking a little bit militarized.”

Cantor Fitzgerald had two choices after losing 658 people, or the majority of its New York workforce, when terrorists attacked the World Trade Center: Shut down, or keep going in memory of those employees.

The firm opted to rebuild and now some of the children of bankers and financiers who perished have followed their parents into the business.

“Imagine how tight this company was, and then we lost them all,” Chief Executive Officer Howard Lutnick said Friday in an interview on Bloomberg Television’s “Balance of Power With David Westin.” He described attending funerals for days on end as “pulverizing” and reflected on what has come from the decision to keep the firm operating and to support victims’ families.

“We were behind the times as far as technology was concerned,” Kelly said in an interview on Bloomberg Television. “So we made a major investment both in computerization and people.”

It also expanded the group’s mandate, forcing it to develop counter-terrorism capabilities. And in the intervening years, more potential vectors for attack have emerged, such as drone technology and cyber intrusions, forcing continued evolution.